Ta Da! The Monzani at Last

In the face of massive technological opposition, I've finally managed to both finish the work on the Monzani, and persuade my camera to take the photos.
Lets look at Monzani himself first, and what better source than The New Langwill Index ( still available  from Tony Bingham, indispensable for the flute aficionado)

MONZANI & Co. Mark, a crown
Workshop founded by Tebaldo Monzani ( born Verona 1762, died Margate, Kent 14 June 1839 )
Flautist, composer of flute music, later publisher, maker, initially he learnt both flute and oboe; from 1785 in London as a flute player, in which year he unsuccessfully applied to join the royal society of Musicians; until c1803 active as professional flute player, from 1787 also as a music publisher; 1800 as the music publishers 'Monzani & Cimador' in partnership with the composer Giambattista Cimadoro of Venezia; c1805 partnership dissolved; by 1803 also 'Music Seller and Musical Instrument Maker to his Royal Highness the Prince of Wales', according to the label in a reported guitar (d 1803); 1805-1808 as 'Monzani & Co'; 1807 freedom of Musician's Company, when described as 'son of Anthonio Monzani late of Verona, Italy, merchant deceased'. Naturalised by act 47 Geo III'; 1807 advertised as 'Patentees and Manufacturers of the New Improved German Flute in Three Pieces without Thread';
from 1808 in partnership with H. Hill, in 1815 appointment as 'Music Sellers to the Prince Regent', by 1819 'as music sellers in Ordinary to His Majesty'; 1808 established as flute makers initially as 'Monzani & Co.' although the business was also listed as 'Monzani & Hill'; 1808 entered as 'small' workers their hallmark 'HH & TM' at Goldsmith's Hall; 1829 Monzani retired, being succeeded by Hill, as 'Hill, late Monzani'; in an advertisement of c1830 offering patent flute, Bb tenor flute, 'third or F flute', oboe, 'durable clarinet' with patent keys.
'Messrs. M. & H. beg to caution the Public against being imposed upon as a number of spurious imitations of their Instruments are now exposed for Sale, some having the name Manzani, others Monzani & Co stamped on them; but, on examination it will be found that neither Material nor Workmanship possess the least value whatever.'
1839 died aged 77.
Important activity as a music publisher, encompassing both vocal and instrumental music; the earliest wood wind instrument maker to number his instruments, commencing c1809 to do so; his instruments were 'celebrated for their elegant workmanship' (James); 'silver keys and mounts are almost invariably hallmarked...the shanks of Monzani's keys were commonly marked with a crown (Bate) 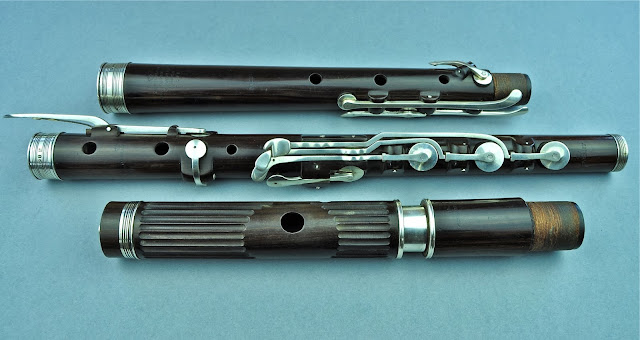 Monzani's flutes are often dismissed simply as forerunners to the much better known Rudall  & Rose, but I have to say that he's one of my favourite makers, and his instruments just exude class and sophistication.
As you can see, there are several very characteristic features. The first of these is the reverse tenon in the head, something which Rudall & Rose also adopted for their early flutes, whether under Monzani's influence or not is unknown. ( Monzani would have been the most important London maker before the  advent of Rudall & Rose) This feature leads to the seemingly odd position of the embouchure in the head, which initially appears to be too close to the slide, until one realises that the head is being considered as barrel plus head, and then the proportion becomes correct.
The "Greek column" grooves in the head are also characteristic of the better class of Monzani flutes.
Two other things would mark out this instrument as a Monzani. The oblique G# key which was a constant feature of Monzani's flutes, and the combined lower middle joint and foot, which is, I think, unique among English flutes. ( it is, of course almost universal in the late 19thc "German" flutes)

The flute is stamped as in the pic below 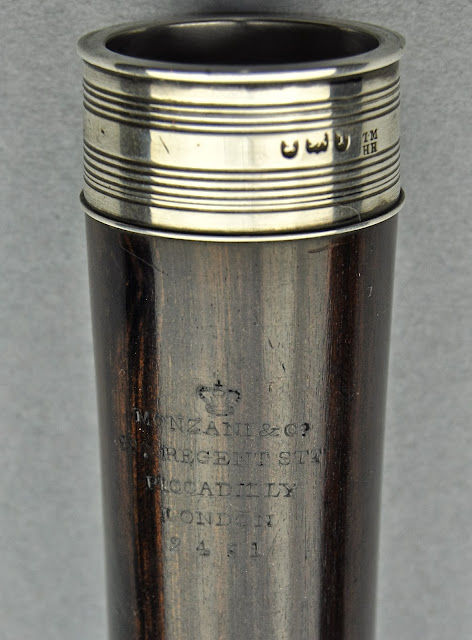 According to Langwill, this address was in use between 1822-33, and the number puts it either late 1824 or 25.
The hallmark, in this case only on two of the mounts and not the keys, should also help us to date the flute, since hallmarks are year specific, and although there doesn't appear to be a city mark in this case, it would be hard to envisage that the mounts were made anywhere else but London, and accepting that, the date letter, i, would indicate a date of 1824, which matches nicely with the address and number evidence. It does pay to be careful here...just because a mount or key can be dated to a specific year, doesn't necessarily mean that the flute itself was completed in that year. Keys and mounts made earlier could have been used on a flute some years later, so the best we can say for certain is that it does not pre-date the year of the hallmark. Since writing the above I tried to check out the hallmark more fully, so thanks to Peter van Oel from the Silverresearch website, who confirmed that it is a London mark from 1824, and that city marks were omitted on occasion, even though this is a late date for the practice.
Other features which are of interest are: 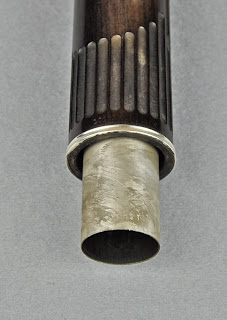 The head liner is solid silver. Although it's all too commonly assumed that this was standard with high class flutes, in fact in over 30 years of collecting and restoration I've only seen it a handful of times, and this is the first time on a Monzani. 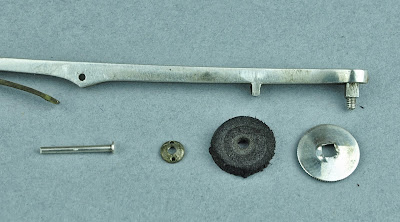 The flute has the flat circular pad flaps, rather than cups, which were common on Monzani's instruments, and are a more sophisticated development of the flat flap keys common in the 18thC. The circular flaps are attached by means of a threaded stud, with a square base, to match the square hole in the flap. The pad, which is a thin piece of leather, not a stuffed pad, is held in place by a threaded disc which threads over the stud. Two small holes or depressions in this disc make it easier to thread it on and off. The whole assembly does not tighten fully, which allows the flap to align itself with the seating. The photo should explain better than I can.
Here's the key assembled, from underneath...

Note that the spring is attached by a screw and not a rivet, something which again indicates a flute above the ordinary.  Also note two other details about the key which are remarkable...the "pin headed" axle pin, a feature which I've normally seen on flutes which are a bit earlier than this, and the little spigot between the flap and the axle. This is just at the point where the key passes through the guide blocks, and there is an equivalent section of wood cut out of the body between the guide blocks. After some thought I've decided the function of this feature, which considerably complicates the process of mounting the key, is to allow the guide blocks to be very small and neat, which indeed they are (see later photos) What it means in essence is that when the key is elevated, there is still a large surface of the key in contact with the guides, and little or no chance of the key being deflected sideways over the guide, since the spigot is still well within the guides even when the key is fully elevated.

One other minor but notable feature is the seating for the Long F key, where the surface of the flute has been left as a flat surface parallel with the key flap.

This is achieved at the same time as the short F block is carved, and it's clearly seen above that the two blocks are part of the same upstanding ring which is then carved away.
But what is its function? It's not a standard feature on Monzani's flutes, and even speaking from my experience, there's nothing obvious that springs to mind. If anyone has any ideas, I'm open to suggestions.

The one piece lower middle and foot has already been noted as a standard Monzani feature, but this flute again departs from the norm by having a B foot, with absolutely stunning execution of the keywork.

Here's another view...which shows a couple of interesting things. Firstly, look at the incredibly narrow and long dividers between the long foot joint keys. They are slightly less than 1.5mm wide and 33 mm long, and both are still uncracked and fully attached.
Secondly when the lower middle and foot are in one piece, there is no possibility of turning the foot to reposition the foot joint keys to individual preference, as when, as normal, the foot joint is separate. Thus, the angle which separates the line of the finger holes from the C,C#, and B keys is approximately 13 degrees. 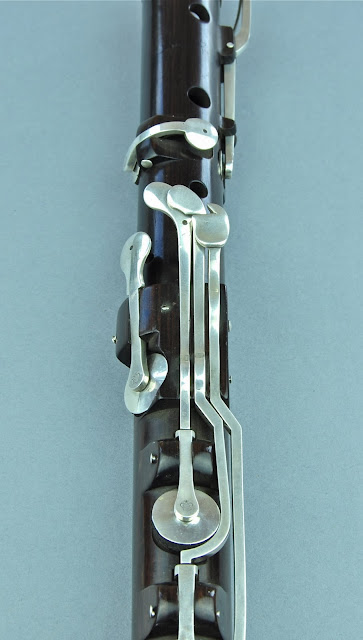 This position appears to have been carefully selected to allow the player access to the Eb, C, C#, and B keys.

Finally, here's another shot of the lower joint, which serves to emphasize the quality of the workmanship which is typical of the whole flute.

Monzani was the maker of choice for professional flautists in his day, until superceded in the 1820s, mainly by Rudall & Rose.

What makes this instrument of particular significance is not just the exceptional standard of workmanship, but its quality as a playing instrument. Like many instruments of the period, and unlike later mid 19th century English flutes, it plays easily at modern pitch, and the very short barrel tube extension indicates that it was not intended that it play over a large pitch range.

The other great bugbear of the English classical flute...the flat foot... is also not present on this instrument, again something unusual, since many similar Monzani flutes do suffer from this.
Currently, I've only had it playing with blocked key holes, but I fully intend to pad it as soon as I can.
As you might notice on the penultimate photo, I have tried padding with closed cell foam, but this has proved unsuccessful, due to the necessity of it's being precisely the correct thickness. Back to leather, I think.
I will try, when the flute is padded and playing, to post a sound file, but till then I hope I've managed to inspire your interest in a maker who is these days all too often lost in the shadow of Rudall and Rose.