I'm happy to be able to say that I'm so busy in the workshop and with workshop related projects that finding the time to do these blogs is difficult.
That said, there are some things that you just have to blog about.
I've been talking about the prices of flutes, old and new, but mainly old, as something which doesn't appear to have much logic to it. I've recently come across a couple of sources which give us more evidence of just how expensive or cheap flutes were at certain periods. The first source is a CD of old flute catalogues that I found on the internet. They're mostly late 19th century continental catalogues, with a few English ones thrown in. Here's a page from Samuel Barnett & Sons catalogue from 1911. 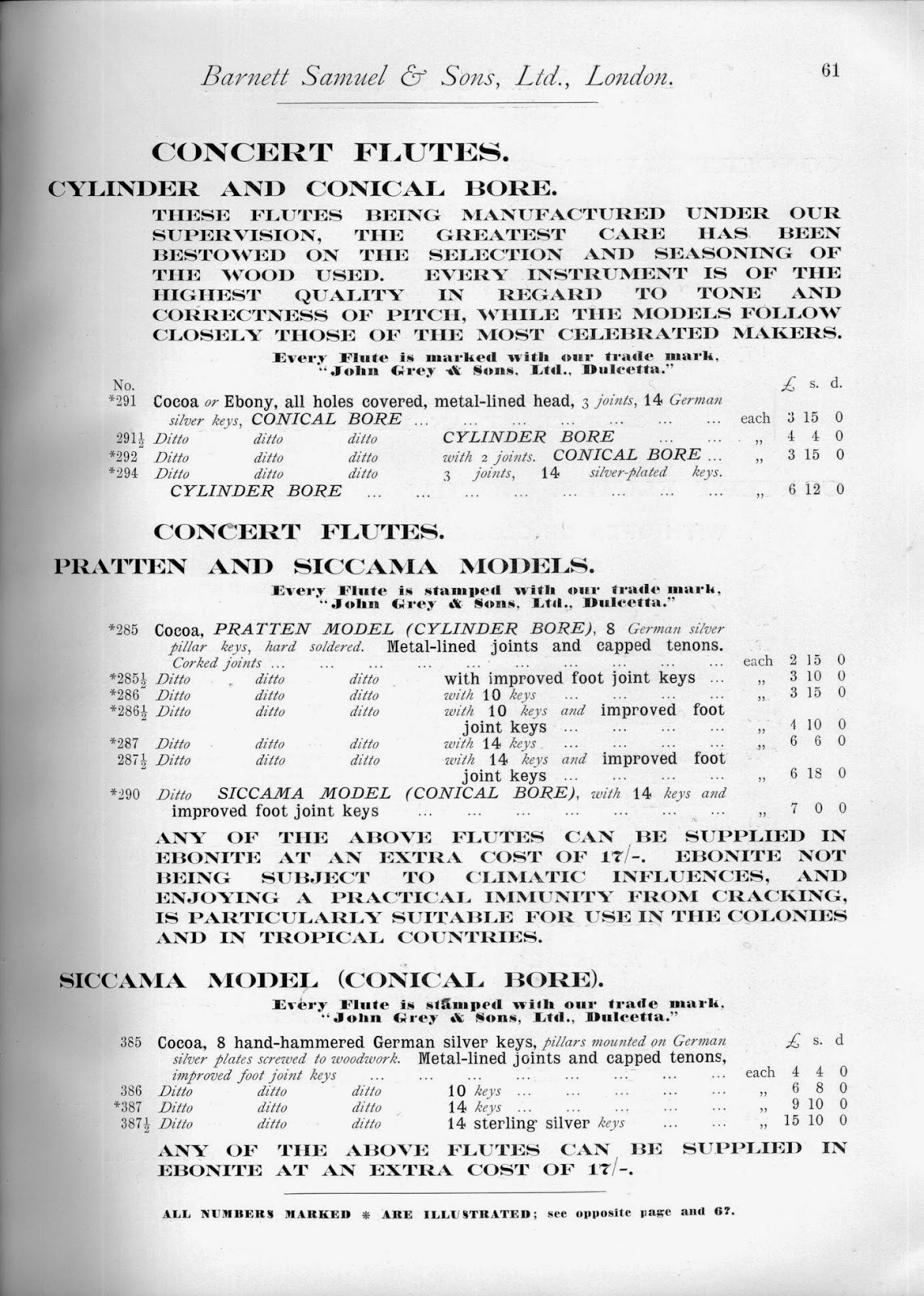 What's interesting about this, to me anyway, is the fact that English companies were still offering cone bore flutes as late as this, ( Rudall Carte were as well) and note that Pratten and Siccama models were still available. Also note the difference to the price that having sterling silver keys made. ( last item on page )

So although it's difficult to accurately estimate the value of money in those days as compared to our own, I think one could safely say that £15 10s 0d was a considerable amount of money in 1911...and this for a flute from a very minor maker. ( Samuel Barnett were the manufacturers of instruments stamped John Grey & Sons "Dulcetta")

So have a look at this from just under 100 years earlier. 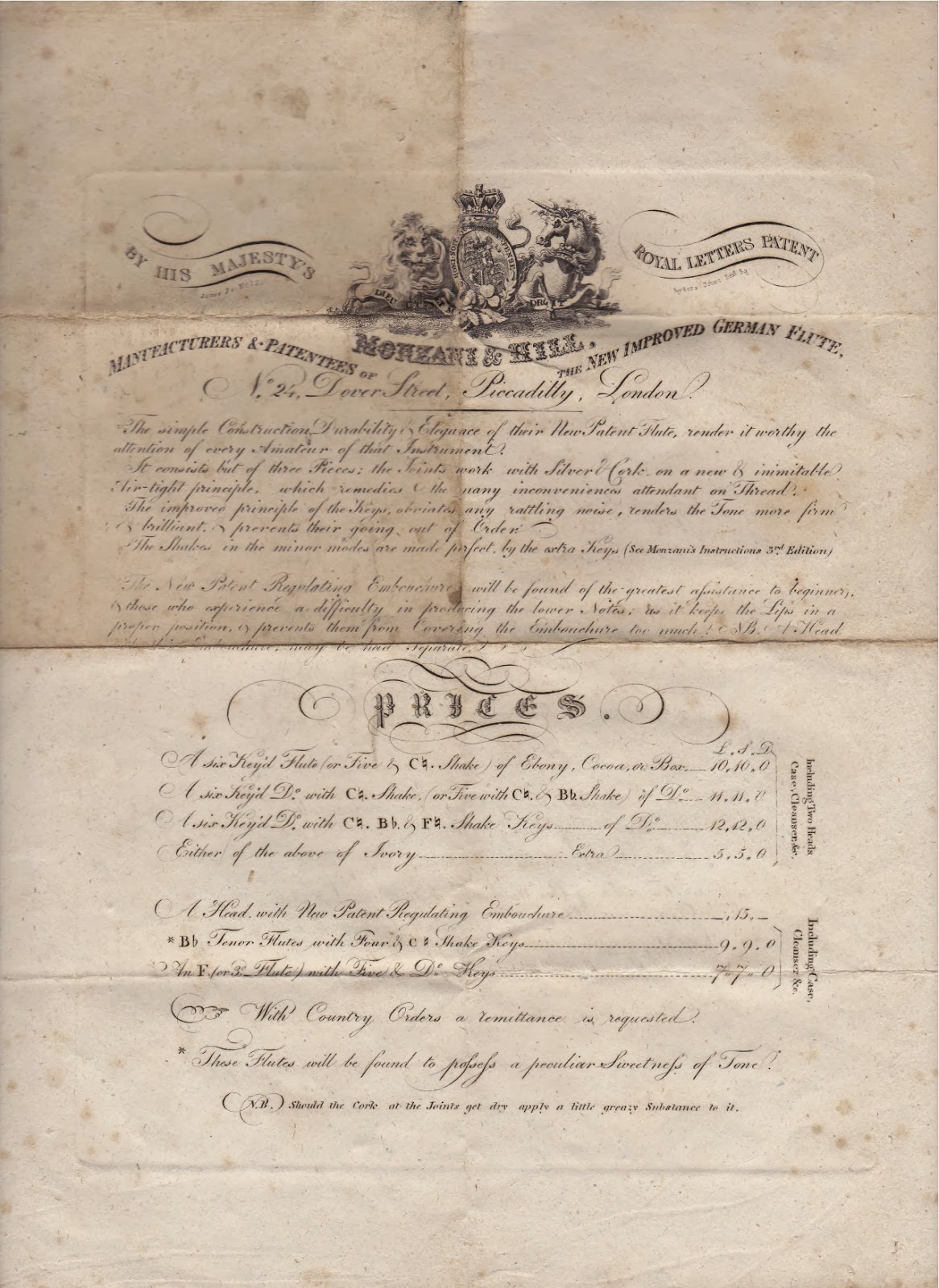 I didn't think this was readable in a smaller size, so forgive the large image.
Anyway you can see that, for example, a six keyed flute was 12 guineas, which I would argue was considerably more, proportionately, than the £15 10s in 1911. I must do some further research to try and put these prices in context, but it is difficult. A recent article I read gave two totally different values for the comparitive value of the currency in a specific year, without apparently noticing!

But this is all just a teaser really...to allow me to describe another Monzani which I've come across recently, and which is the source of the price list above. Flutes which have their original cases are reasonably common, if those cases have their fittings much less so, but flutes that have their original documentation are as rare as a fulfilled election promise.
This flute came with the price list above which also describes Monzani's patent for joints using cork lapping and silver linings to the sockets. The other side of the page reveals this: 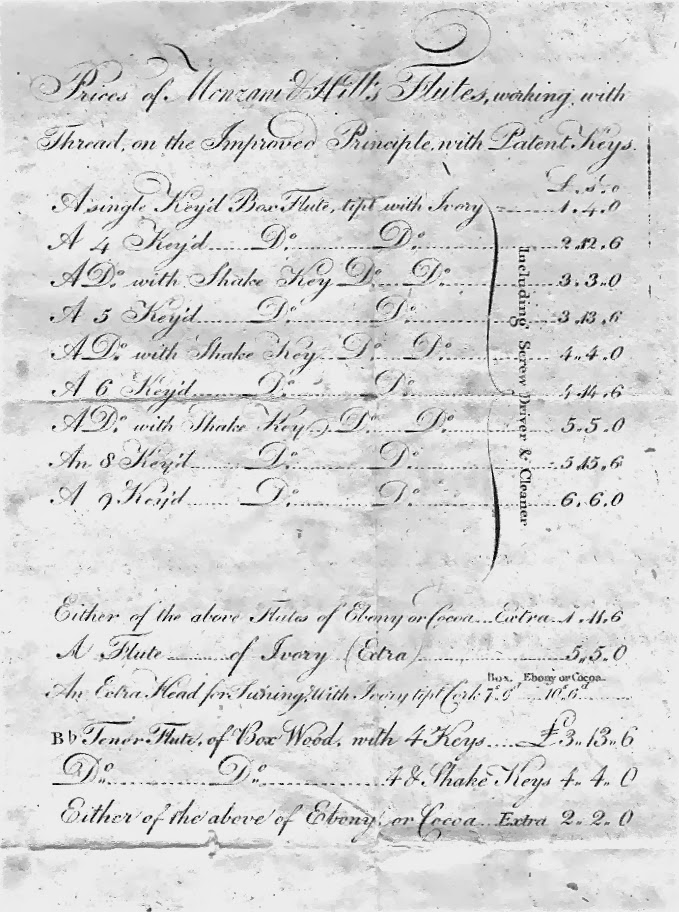 As far as I can make out, the cheaper prices on this side of the page are for flutes lapped with thread, without the silver lined joints.

As if this wasn't enough there was also this: 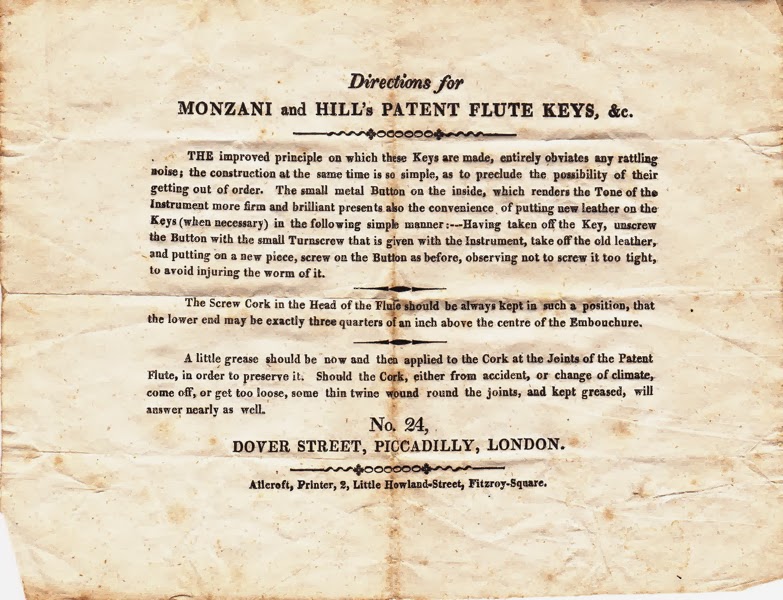 And when I looked carefully in the case, what did I find but:-

the original screwdriver designed to allow the player to unscrew the pad washers and install new pads.
There was also the original wax box made of cocus wood with a screw top, holding what could possibly be the original wax...but that's impossible to say for sure.

One of the things that attracted me to this flute in the first place was the amount of original documentation that came with it, in particular the final document, which while obviously not part of the original documentation, is almost contemporary, dating from 1834 ( I'll discuss the date of the flute itself later). It's a copy of a little booklet (the photo below is almost exactly the actual dimensions ) which was produced by W.N. James, better known as the author of " A Word or Two on the Flute".
I thought it was a bit strange that I hadn't come across this before, and a little online research soon showed why. There is only one, possibly two copies of it listed in all the major libraries that I could get access to online ( which is the vast majority of them, I believe [ see Worldcat ] ) The one definite copy is in the British Library, the possible one is listed as among a collection of personal papers held in an Ivy league college in the US, but searching in the actual listing of the collection fails to reveal it. I must write to them to try and pin that down. Neither is there any copy currently available through any of the antiquarian booksellers accessible through Bookfinder, nor has any copy been sold at any of the major auction houses since the mid seventies (not that a copy was sold then, the data is just not available)
When I actually got my hands on the flute, I discovered, as you can see below that in fact this copy is the second edition of 1834. The first edition is 1829. Checking again, I discovered that this may be the only known copy of the second edition, as the searches outlined above failed to locate any copy.
Always dangerous to be too definitive, I think it's probably safe to say that this is the only copy that has come to public notice. 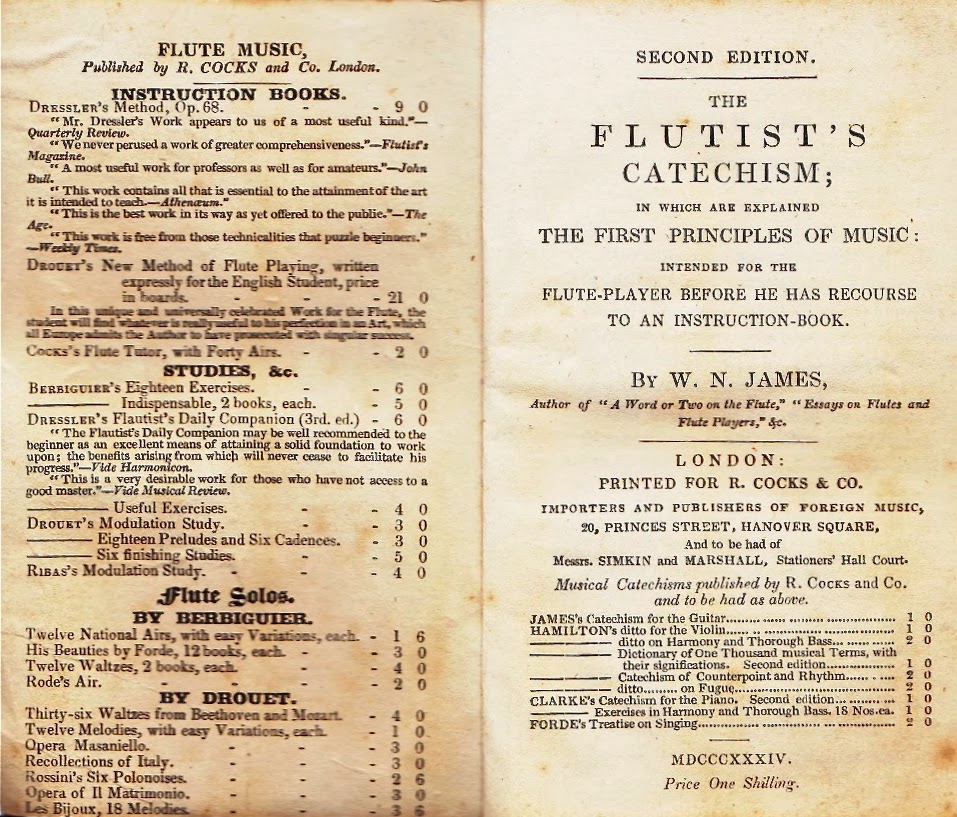 Now to the flute itself. The original pics I had of it showed what appeared to be a fairly standard seven keyed flute of the period, even if the case was unusual. 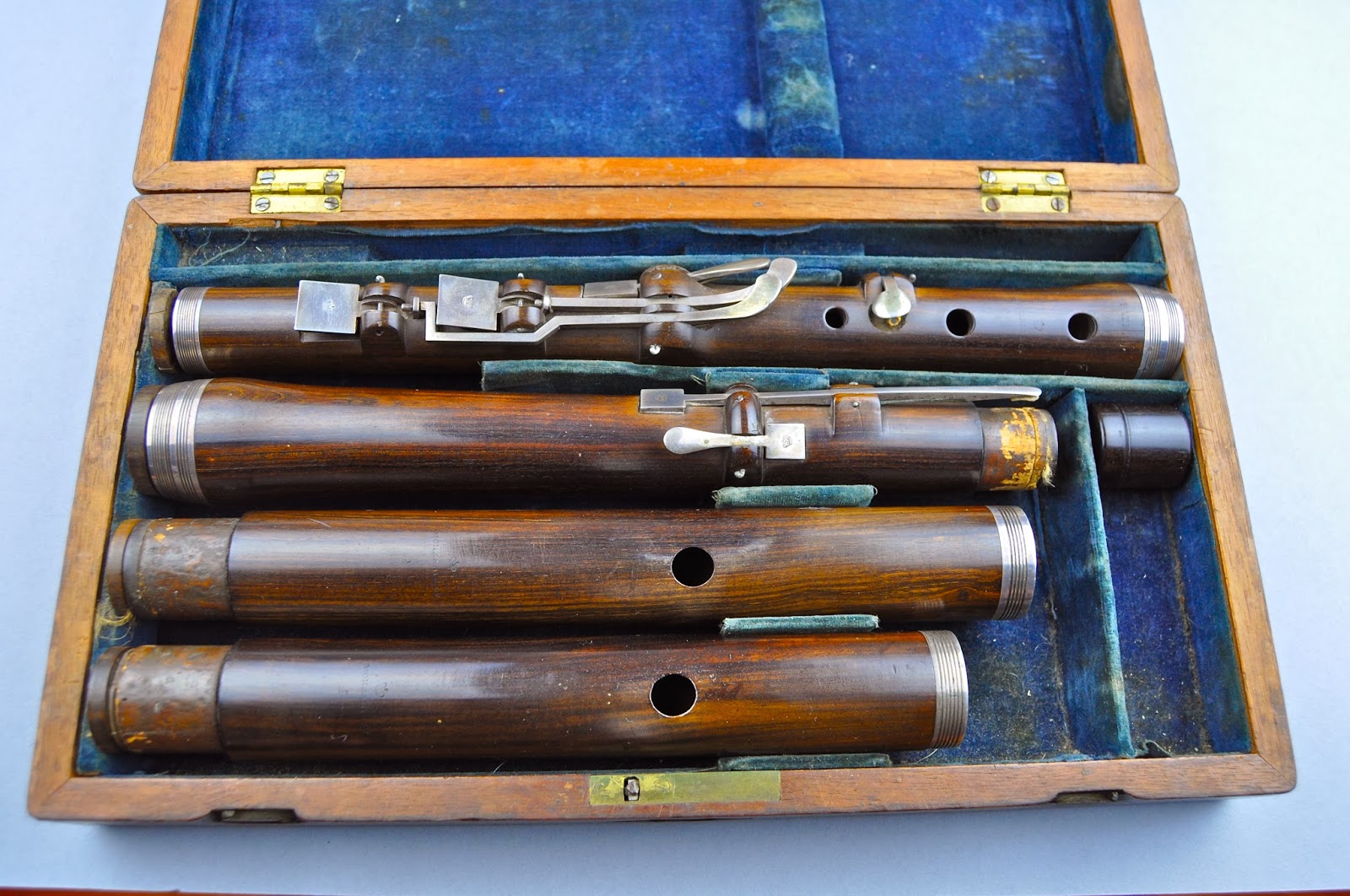 What I couldn't figure out was what were the wooden rings/plugs at the left hand end of each joint?
Next photo explains all. 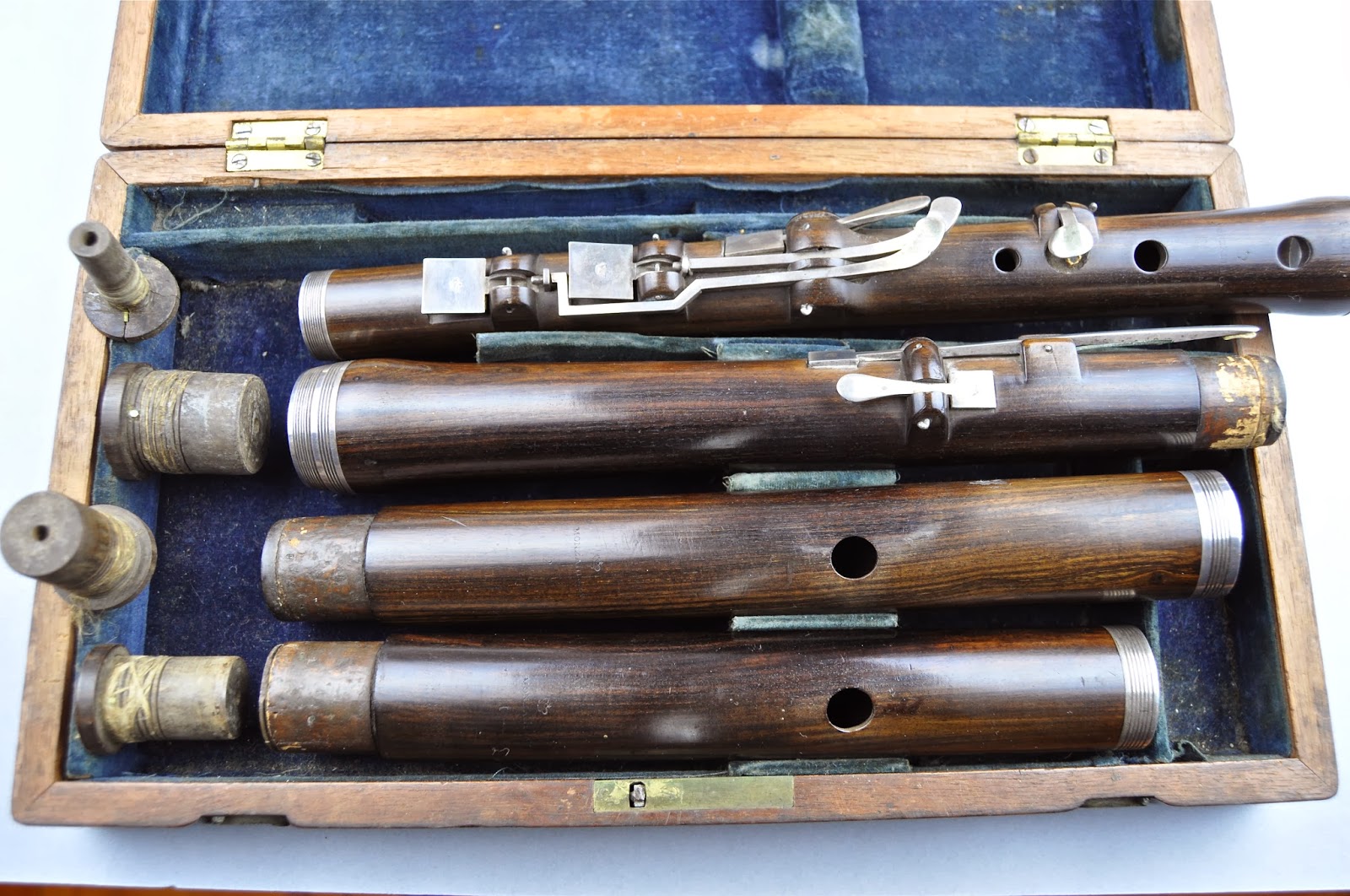 You can see here that in fact there are wooden plugs which fit into the end of each joint, and from the hemp lapping on each of them, I conclude that they were meant to fit snugly, if not airtightly ( if that is a word, as Ross O'Carroll-Kelly would say!) Each plug hinges on the edge of the case for ease of removal of the flute. Function? Currently unknown, I'd have to say. I've never seen the likes before. Could it be possible, and the idea just came to me as I write this, that the function was to prevent the flute from drying out too quickly in the case, by sealing the end of each section of the bore. Seems a bit far fetched though.

In my first examination of the flute, I gradually became aware that the dimensions were a bit odd. It seemed, in comparison to the other couple of Monzanis that I have, thicker and less elegant. The early Monzanis are known for their fine workmanship and lines. Out with the calipers, to discover that the head diameter was 29.72mm in comparison to the 27.4 of the "standard issue". The bore of the head is 20.4/19.64 at the tenon. My first instinct was...this is a Bb...but the length seemed wrong, only slightly longer than the standard. So out with the tuner, which showed a "bottom D" slightly sharp of C#...to approximately the same extent that the concert pitch flutes are sharp of modern a=440.

I have to admit I'm totally mystified by this. Looking at the pitches listed in the price list that came with the flute, it doesn't seem to match any of them. The most obvious possibility is the Bb tenor flute, but as far as I'm aware the Bb flutes of the period had a six finger note of Bb, and the nomenclature which calls a concert pitch flute a flute in C because of it's lowest playable note using the foot joint keys was not in use at this period. Using that type of description, this would be a flute in Bb since that's the lowest playable note. ( taking historic pitch difference into account)
Against this is the appearance of existing Monzani flutes that are listed in collections as being in Bb, which have totally different proportions. ( see the DCM collection catalogue).
I'm very open to suggestions about any of this, but for the moment it seems that like the Flutists' Catechism, this flute appears to be unique.
When I get the time ( hah!) I'll post further measurement and pitch details.
One final nerdish detail. The address on the flute is 24 Dover St. and the name Monzani and Co., but Langwill lists the Dover St address as being under the name Monzani & Hill.
Phew!
Posted by Hammy at 15:37