Fraises are the little tools that wind instrument makers use to undercut the tone holes, thus making them wider where they meet the bore. Undercutting the holes has several functions, including modifying the tuning, and also the response of the note produced by that hole.
They are basically like tiny reamers, but they have to operate from inside the flute.
They are passed up the bore and lined up underneath the hole to be undercut. I use a wooden dowel with a tiny magnet in the end to do this. Then a T shaped handle is screwed into the threaded bore in the fraise, and this allows the tool to be pulled up into the tone hole and rotated. The thread is cut so that the direction of cut also tightens the handle in the fraise. With sufficient material removed, the handle is removed by pulling up hard into the hole and snappily reversing the direction of rotation. The fraise is then tapped free and falls back into the bore.

Here's a few pics of the manufacture.
The process requires an engineering lathe, and a milling machine with a dividing head. The threaded bore and basic taper of the tool are produced on the lathe, and then the flutes are cut on the milling machine, using the dividing head to ensure even division of the flutes. The image below shows the flute cutting, in this case at intervals of 30 deg. giving 12 flutes. ( I should point out here, to avoid confusion that the grooves in a drill or reamer are called flutes ) 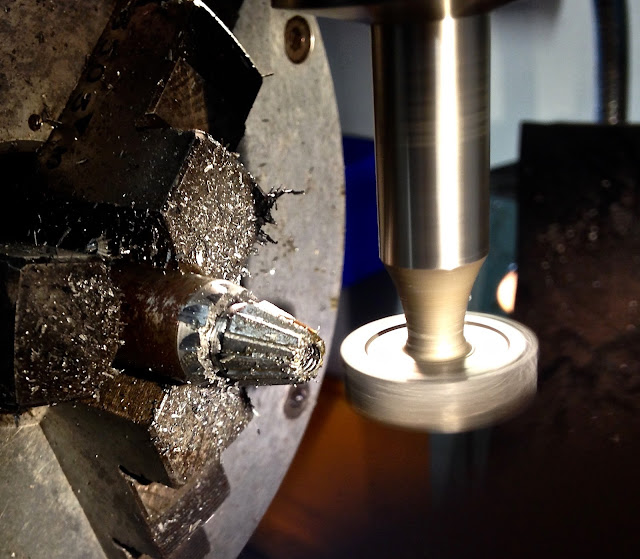 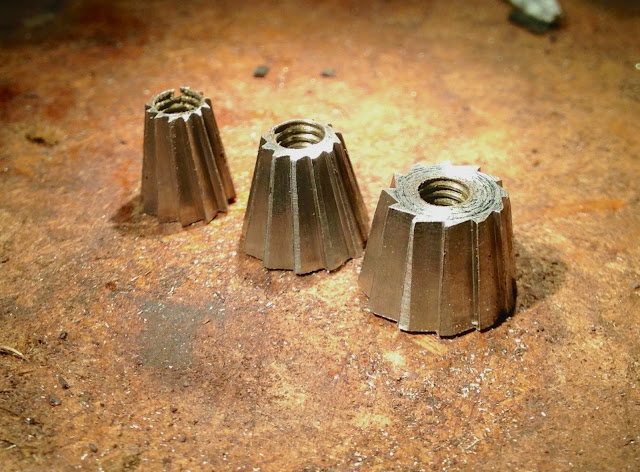 Two interesting facts about the fraise. They are fiddly little buggers to make and fraise is the french for strawberry...

Bit embarrassing, really. The last post about the square R & R did bring responses via E-Mail, where it was pointed out to me that this type of flute is really quite common, and was part of a large series of flutes that R & R made for the band market.
I have two excuses though.
Firstly, all the boxwood band flutes that I'd previously seen had been stamped Key, Rudall & Co.
Around 1855-56, Rudall & Rose bought the band instrument firm of Thomas Key, and traded as Key Rudall, & Co., then Key, Rudall, Rose Carte & Co. and eventually just as Rudall, Rose, Carte & Co.
I hadn't realised that they eventually dropped Key's name.
Secondly, the ones I'd seen with the Key, Rudall stamp were of an inferior manufacture. This flute was really rather nice.
So sorry for misleading my readers!

I haven't been blogging for a while, partly because I got a back injury which kept me out of the workshop for a few weeks earlier in the summer and then had to play catch up, but one thing I wanted to discuss was the issue of coil springs as opposed to leaf springs on keys, and hopefully clear up a lot of the confusion about this.
I've been using small, stainless steel coil springs for quite a few years now on my flutes with great success, but I occasionally still come across those ( including other makers ) that see them as inherently inferior to leaf springs, and so I wanted to take the opportunity to explain that in fact they are exactly the same thing and operate in the same way.
Think of a leaf spring first. This is the small "leaf" of brass which is riveted under the key, and curves
down to touch the body of the flute just behind the axle. When the key is pressed, this causes the spring to flex, and when the key is released it springs back into place. The strength the spring depends on the thickness and degree of temper, i.e. springiness, of the metal, which is usually brass.
It's important to note that if the spring is slightly too long, and the point of the spring touches the body further than the centre of the axle, then the action of the spring is reversed, and the key will be held open, rather than closed by the spring. From this observation we can garner an important fact. The upward force of a leaf spring acts where the point of the spring touches the body. The degree of force results from the stiffness of the spring.
The small coil springs are placed under the key in more or less the same place where a leaf spring would touch the body, and so the first thing to realise is that they exert their force at the same point.
The second thing to realise is that the degree of force again depends on the same factors as with the leaf spring, essentially the springiness of the coil, in turn determined by the thickness  and stiffness of the wire.
I think the simplest way to see the similarity between the two types of spring is to think of the leaf spring as a small section of a very large coil spring. Think about it....

There are advantages to the coil springs from several points of view.
Firstly, they are easy to install, and consequently replace.
Secondly, the action of the spring can be easily adjusted by putting little shims under it, which will make it stronger, or by making the little hole in which it sits slightly deeper, which weakens it.
I've been trying to develop a method of making the coil springs adjustable in this way by the player themselves, but although I know how to do it mechanically, I've yet to figure out a practical method of applying it.
Posted by Hammy at 15:46 5 comments: