For those who missed my classes this summer....the main points

Back in the saddle again after the summer teaching trips, which inspired me to say something about the whole teaching experience.
From my point of view, as a teacher, I'm fascinated by how I learn so much about the music through teaching it, some of which I can then pass on to those I'm teaching.
It's well known that if you really want to understand a tune, then teach it to someone else. This doesn't necessarily mean in a formal teaching situation, but just passing on a tune to a friend means that you'll find out if you really understand what the "heart" of the tune is. Very often you'll find (I certainly often have this experience) that some things that you might take for granted about a particular tune take on a totally different aspect when you start to pick it apart for teaching purposes.
Here's a few of the points that I found myself making again and again to players at all levels this summer.

1/ Learning melody, i.e. the sequence of notes, is only the beginning of the process. Too many people attending workshops do so with the intention of coming away with more tunes in their repertoire, without realising that the problems they have with basic technique prevents them from playing any of the tunes they "know" in any meaningful way.
Who's the better musician...someone who can play ten tunes, well phrased, and with a good sense of rhythm, albeit with limited but appropriate decoration...or  someone who has possibly several hundred tunes, which are all played with dubious phrasing, and lacking any coherent sense of rhythm, and very often, tuning?

3/ Don't practice mistakes! All too often I've seen someone trying to learn a tune, making the same mistake in the same place again and again. They attempt to get past the sticking point by, as it were, taking a run at it, only to end up playing the same wrong note in the same place. What's happening here is that instead of correcting the error, it's actually being reinforced.
So realise what the mistake is, figure out what the right sequence of notes, phrasing, decoration etc. is, and make sure you play this the next time, no matter how slowly.
Although I insist that learning by ear is one of the cornerstones of traditional music, it is also useful to be able to sight read in order to figure out what's going on in a particular tune. Just don't get pre-ocuppied with it.
Practice what's right, not what's wrong.

4/ Be careful where you play. The whole point of learning to play is, for most people, to play with others. For the vast majority, this means playing in a session. However, if the playing in the session is not strictly in time or tune, as can often be the case, I'd argue that playing in such situations does nothing for one's development as a musician. At this crucial stage of a musician's development I'd think that it's better to play along with a good recording, which will reinforce your tuning, timing and phrasing.

5/ Record yourself. I think a lot of developing musicians are unaware of what they actually sound like.
If you don't know what you're doing wrong, then how can you correct it?
Listening to one's own playing is a difficult thing to do, even for most "advanced" players, but it can be a very useful technique. It can help to keep old recordings for comparison. Are you making progress?

Here's what I look like when I'm making similar points to the above... 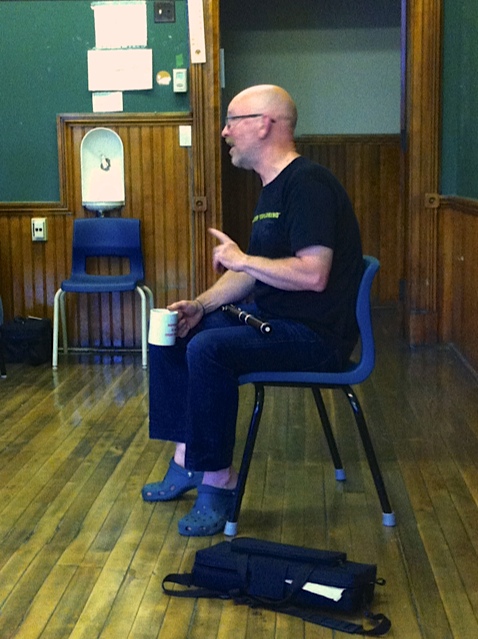