The crack goes on...

Making some progress on the cracked head that I posted about. It's at the stage that I'd call "early cosmetic". Here's a couple of pics.

Tried to get the same angle as the original image, so you can see where the crack was.

I was fishing up in Galway when the news came through that our local pub, The Top of Coom had burnt to the ground. First of all, nobody was hurt, which is the most important thing, but it's hard to explain, particularly to people who don't live in a small very rural community, just what a loss this is, and more particularly the loss that it is to the traditional music community.
For as long as most people can remember, The Top of Coom, which was the highest pub in Ireland, at just over 1000ft, was a really important centre for music and even more particularly for singing.
It featured in very many TV documentaries over the years, and perhaps a lot of you know that Conal Ó Gráda's first CD was named after it. Unfortunately, this is what it looks like now... 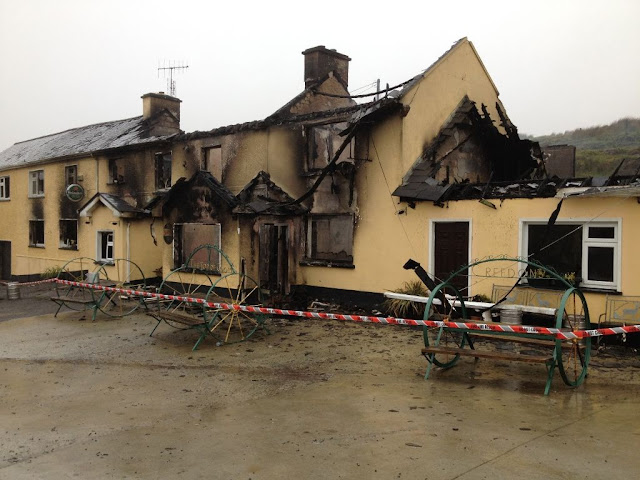 The punches and dies for the new key cups have been set up in the neat little press that I got. Here's a video of it in operation. If the backs of the cups look odd when I take them out, it's due to the grease that I put on the disc to ease it's passage through the die.


Still working on the key shaft castings...they need a bit of tweaking!
Posted by Hammy at 11:04 1 comment:

With all the repairs I've done recently, it got me thinking about one of the most common and misunderstood faults that flutes, old and new, can have - a crack.
Cracks in wooden flutes can occur for two reasons. Firstly they can develop in the seasoning process of the timber. This is one of the reasons that timber suppliers wax the ends of the billets, because moisture leaves the wood much more easily via the end grain, and if this happens too rapidly it can lead to cracks.
If these are big enough, then the piece will be rejected in the manufacturing process, but what can happen is that a very fine crack will go undetected until the flute is finished and begins to be played. Then the stress caused by the timber absorbing water and drying out again, as happens in the normal process of playing, can cause this minor cracking to quickly become bigger. If this is the reason for a flute joint cracking, then it generally appears very soon after the flute arrives from the maker and begins to be played. It's also one of the reasons why it pays to play a flute in gradually.
Cracks which develop later on are generally due to water stress, typically caused by a combination of not playing on a regular basis, playing for long periods of time with out swabbing out the moisture, and storing the flute in conditions which are too dry. Essentially it's moving the timber from very wet to very dry conditions too quickly. Physical stress may also result from this as when a swollen tenon can crack the socket.
The metal lined parts of the flute, the head and barrel, tend to suffer more from this, as wood trying to shrink over a metal tube has "nowhere to go".
Fixing cracks is one of the commonest repairs that the flute restorer has to face, and unfortunately is also one of the most misunderstood. The two commonest methods used, filling the crack, and glueing the crack are unfortunately also the two most unsuccessful.
Putting material into a crack can on a short term basis solve the problem...particularly if air is leaking from the crack, but although a soft material such as beeswax will not cause this problem ( it causes others) a harder material, such as the commonly used epoxy, essentially only serves to push the two sides of the crack further apart. It may take some time for this to happen, but if you look carefully you will eventually see very fine cracks developing, one on either side of the filling material.
So in attempts to avoid this the idea of gluing the crack closed arises, and in fact some fillers are glues in their own right, such as the epoxy mentioned above. The problem here is that the types of timber that flutes tend to be made of do not glue at all well, and given the fact that by the time the repair is attempted the internal surfaces of the crack are usually covered in oil or grease, the chances of any sort of permanent adhesion are extremely low. It must be remembered that the forces that cause the crack in the first place are extremely strong, and even if there was good adhesion it might not be sufficient to overcome them.
Again, if an old flute is repaired by this method, it may hold for a while, especially if it's not played much, but eventually cracks will appear again between the glue and the timber.

So, what's the answer? In a word pinning. In principal this technique involves drilling small diameter holes across the crack, at 90 degress to it, and at a tangent to the bore. Small pins are then inserted and glued into place, and then the repair is cosmetically finished. I said glued into place, but in fact originally silver wire was used, sometimes threaded ( as in a screw thread). This is the only type of crack repair that one sees on 18th and and 19th flutes, due in part I'd imagine to the fact that contemporary glues were just about useless in these cases.
The technique that I use involves threading, but this time of the sewing variety. A bunch of threads, the number depends on the size of the drill used and the thread thickness, is pulled into the hole until about 20mm still protrudes. A drop of superglue is applied to the thread, and this is then rapidly pulled into the hole. The result is that the pressure causes the glue to set almost instantly, resulting in a hard pin which is glued into the hole. The ends are cut off, and the process repeated.
The reason that this is such a successful method of crack repair is that the pins act directly against the pressure caused by the crack wanting to widen, and the area of glued surface which resists this is vastly bigger than just putting glue on the sides of the crack, which of course also happens in this case.

Here's a photo of the head of a flute by William Card that I'm currently working on. I left it unfinished, so that you can see the crack itself, the holes drilled, and some of the thread pins inserted. (they've been cut off flush on the right hand side)  I'll post another photo when the work is completed.

Completely snowed under at the moment with repairs and restorations, which have forced me to put lots of projects on which I'm working on hold, and this got me thinking about the whole area of restoration/repair and it's relationship to flute making.
Of course, back in the day when there were no (or very few) new"Irish" flutes, restoration formed a major part of my work, and this was important to my development as a flute maker in that it allowed me to examine and measure and play just about every make of English flute from the late 18th to the early 20th centuries.
As new flutes became the first choice instrument of the Irish traditional musician, the volume of this work declined, and most of my work in this area now consists of work on the flutes of other revival makers.
Strange to say, repair/restoration is a fairly different art to flute making, and being good at one doesn't necessarily imply being good at the other. Here again my early experience in the workshop was crucial, and provided experience which is largely unavailable to the younger generation of makers.
Here's few observations that occurred to me.
When I'm really busy with work for my own clients, I often have to turn away flutes by other makers. I hate to leave people down, but I don't think it's too much to expect that makers will maintain/repair their own work. This is something people sometimes don't think about when they buy a new instrument...
I have someone else I can recommend to them when I'm that busy...as I am at the moment, but I have to look after my own customers above all else.
A classic scenario, which I'm getting better at avoiding, goes like this:
Someone turns up at the workshop with a very battered old flute which they want restored. Almost without exception the story going with it is that it was their grandfather's, and it was "a great flute in it's day". It's usually obvious that it was no such thing, but the element of sentimental value and rose tinted glasses ( or ears ) plays strongly here. The amount of work involved in even getting the instrument playing is usually huge, and in value much greater than that of the flute itself, so I've many times been persuaded to take on such work. Sometimes it works out well, but on just as many occasions the restored flute doesn't live up to the memory, and the restorer gets the blame!
In all cases honesty is the best policy, and it's easier to gently explain to people that their grandfather's flute may have been a great flute in it's day, but it's past it's best, and they shouldn't waste their money trying to make a silk purse from a sow's ear, rose tinted or not!

When this current batch of work is finished, hopefully by after the weekend, I'm taking a sabbatical from restorations...of other people's flutes at any rate, unless it's something really interesting that I want to examine and measure etc.
I have about 20 mostly very nice old flutes of my own, dating from a late 18th century Potter Senior up to some very late Rudall Carte 8 keyed, with a few early mechanised flutes along the way that are all waiting for a bit of TLC. Someday, someday, I'll measure and photograph them all, and publish the results on     the website, but for now it's back to re-corking, repadding, bent keys, pinning cracks etc etc.
Posted by Hammy at 14:58 No comments: