Marsh Fritillaries and a little bit about Monzani...

Well, I did say at the outset that I would post occasionally about some of my other interests, which all basically fall under the umbrella of natural history ( well, most of them, anyway) so here goes.

I do some volunteer work for the Irish National Biodiversity Data Centre, which basically involves monitoring the numbers of butterflies in my area.
The idea is that volunteers all over the country count the numbers of butterflies which they observe on a predetermined walk, or transect, which ideally is done once a week from the beginning of April to the end of September. Data is sent to the INBDC and it allows scientists there to get some idea of which species are thriving, dying out and arriving (we have several new species in the last few years, most probably due to global warming)
Mostly it's a lonely pursuit, but occasionally we get together for outings, and a few Saturdays ago a group visited Barley Cove to observe the colony of Marsh Fritillaries there. This is one of Ireland's rarer butterflies, and the only one protected by law.
Here's a couple of pics that I took on the day, which happened to be in the middle of one the best spells of weather we've had in several years. 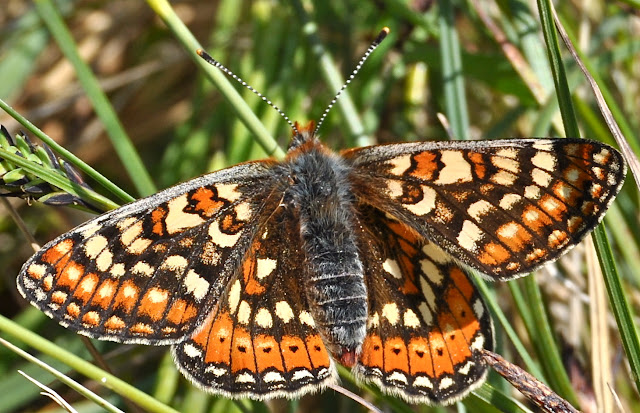 This is a female, which is larger and more brightly coloured than the male. 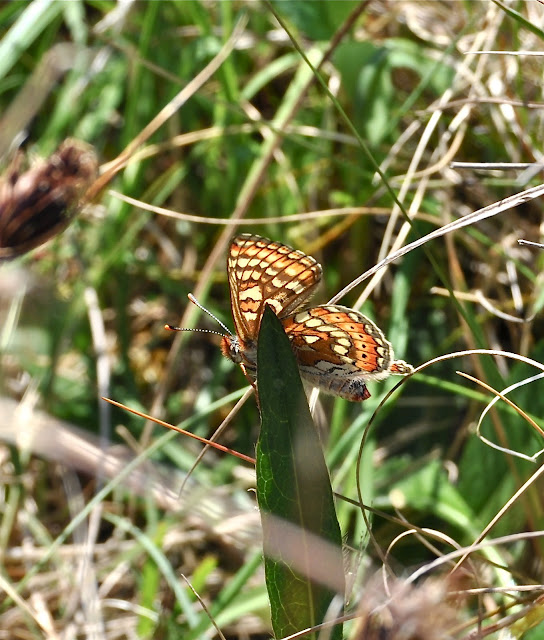 I liked this shot, the way the light is coming through the wings.

As you can see the camera is up and working again. The problem, if it should ever happen to any of my readers, was an inappropriate focus selection, which was preventing the automatic focus and hence the shutter wouldn't work.

Now that I seem to have that sorted, for indoor close up work as well ( see the flute pics on the last post) I'll hopefully get around to posting about the Monzani flutes that I promised so long ago.
The restoration of the second one, which was delayed for so long by the lack of suitable axle pins, I have almost ready. The pins, which were typical of the period, have heads like sewing pins on them, rather than the wire simply being turned back on itself to form a head as was standard throughout most of the 19thc. The originals appear to have had the little domed head made separately and attached in some way, but I've been working on a method of making the head integral with the shaft.
All will be revealed.
BTW find out more about Irish biodiversity here, and see more about the particular scheme that I volunteer for on their facebook page.