The Heaviest Flute Ever Made?

Thought I'd post about this very unusual flute that Mark Redmond very kindly lent me. We tend to think of the flute as being a northern European instrument, with all the major makers being English, or if not that French or German. There is a particular school of flute making though, in southern Europe, which I believe originiated in Vienna, but the Italian instruments that I've seen are of this type only more so!
It's by E. Forni of Milan, and according to Langwill: 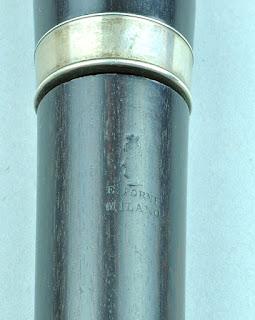 The names of the sons makes you think, there was a certain lack of imagination there, but it certainly doesn't come across in the flute. Rampone, btw, is by far the commonest Italian maker that one comes across. 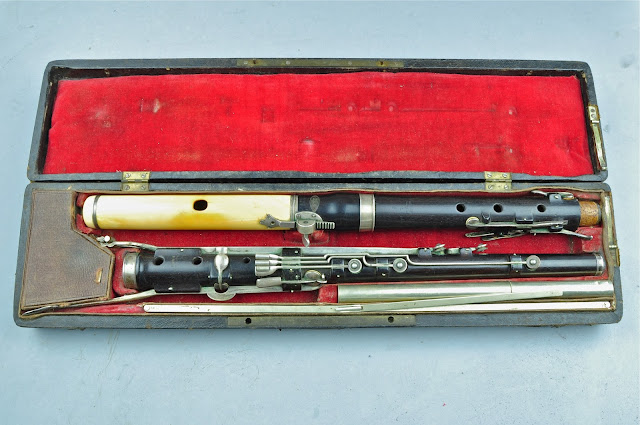 Although still basically a simple system flute it's taken almost to the extreme in terms of add-ons. There are 14 keys, and the foot goes down to A. There are double touches for Bb and Eb, and two keys for G#. The flute is blackwood and the keys silver, but unusually the block liners are nickel silver, which accounts for the verdigris that you see in the pics.
The device on the head, is a tuning slide adjuster, which may, or may not be a later addition:- 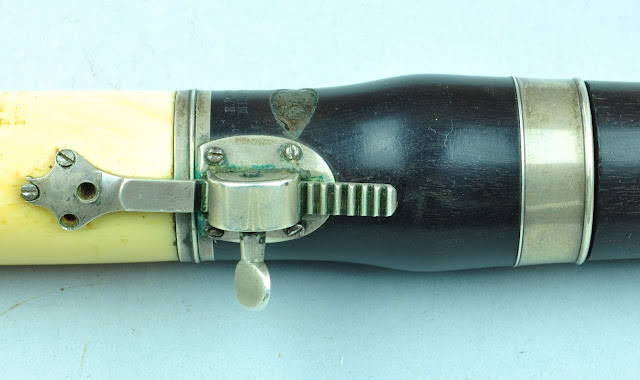 As is usual with this type of the flute, the lower body and foot are combined, but with the foot descending to A this makes for massive piece of wood and silver.
Playing the low A requires the little finger of the right hand to close three keys, and that of the left two.

Some of the double touches are unusual. The one for the Bb is very standard, but why go to such bother to do this one for the Eb

It's operated by the left thumb, by the way.

Finally, there are several unusual aspects to the case. 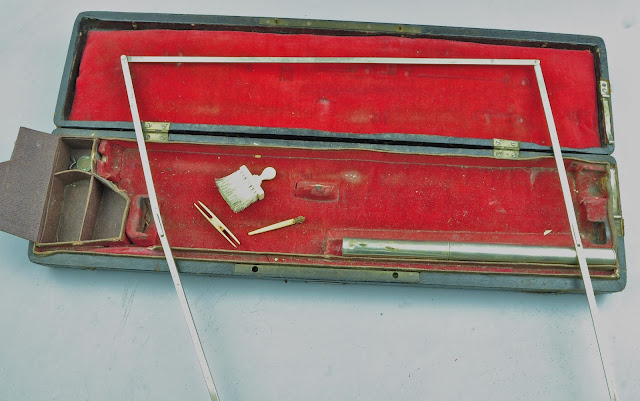 The "frame" is apparently a music stand of sorts, which must attach to the case. When folded away, it fits into the slot at the lower right of the case where it can be seen in the first photo.
The silver tube, I have to say, remains a mystery, despite running it past several top experts in this area. As it came to me, it was empty, with one end missing. (you can see it in the top compartment in the photo above. It was designed to pull apart at the join, but this is also currently jammed.
The only suggestion which makes any sense is that it was to hold rolled up music manuscript, or paper of some sort....or as has just occurred to me, an oily brush for the bore? The little brushes and bobbin are bone and pig bristle.
As for the spring type mechanism on the right hand edge of the case, your guess is as good as mine.
Finally the whole thing weighs in at a huge 1664 gms, or for any Americans out there 3lbs 11 oz!
Posted by Hammy at 10:58