So...what is a "reasonable"position for the slide? One very strong clue lies in the way in which flute tuning slides are constructed, on the vast majority of flutes at any rate. In order to give enough overlap of the two tubes, and to hide the inner tube when the slide was extended, the old makers had a section of the barrel liner protrude from the barrel, and a recess was cut in the head, over the the head liner, to allow this to slide into the head when the slide was closed.
When the slide was open, the normally brass or plated brass barrel liner, would be seen. So for purely aesthetic reasons this was generally sheathed with a silver tube. This, I must admit, looked well when the slide was extended. In other, less common examples, the barrel tube extension was sheathed in wood, originally the same thickness as the rest of the barrel, but turned very thin, comparable to the silver sleeve, so that it fitted into the recess in the head. ( One problem with this solution is that the very thin wooden sleeve is very often cracked )
On some heads, most notably the Potter Patent head, a series of incised rings on this sleeve allowed the player to note exactly the extension of the slide, and these rings were sometimes numbered to correspond with numbers on the little piece of the screw cork which protruded from the end cap. Matching the two numbers set the cork in the correct position for that slide extension...according to the makers idea. An early, less mechanised version of the later Rudall and Rose patent head.
So, isn't it reasonable to assume that the maker, having gone to all this trouble to hide the inner liner tube, never intended the flute to be played with the slide extended beyond this point, which would expose the head liner? The addition of the tuning marks, I think, is a further strong indication of the greatest extent to which the slide was meant to be extended. It would have been a simple matter to make the barrel tube extension and its covering sleeve that bit longer.
If one accepts all that, then the problem arises when trying to play in modern pitch on very many of these flutes. For me, ( and I accept the caveat that a lot depends on the embouchure used) a large proportion of  English classic flutes have to be extended up to half a centimeter beyond the sleeve.
I therefore have grave doubts that these instruments were intended to play as low as 440. They can be made to do so, but what we're looking at here is the original intention of the maker, composer, and musician. ( BTW, Ardal Powell's book "The Flute" is wonderful in the way that he considers the instrument throughout its history from as a combination of the contributions of each of the above )
One thing that does to some extent argue against what I've just proposed is the internal tuning at various slide extensions, but that's for another day....

I'm lucky, very lucky, to live in a great place. Both from the point of view of community, but also physical beauty. A few years ago, I happened to be up early one morning, and got this shot of the sunrise from my back door. ( it was the 22nd September '05, the computer says...) 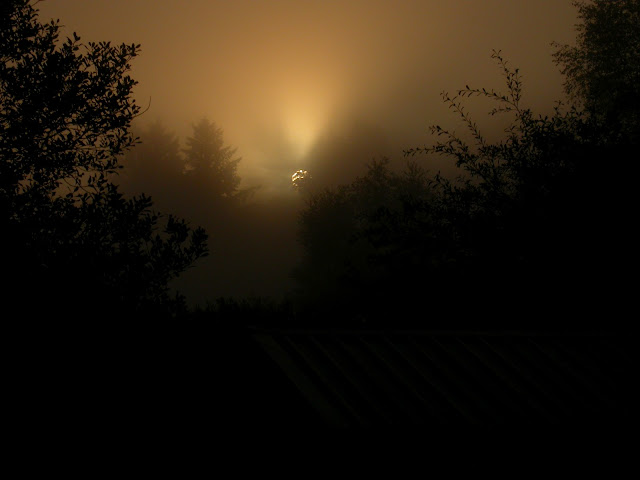