Having been talking about old flutes and pitch what landed in the workshop a few days ago but a very nice, mint condition Rudall Carte & Co. flute. This, in terms of English eight keyed flutes, is a very late instrument. The address, 23, Berners St, tells us that it's from between 1878 and 1910, and I'd guess that it is probably a flute made in the late 1880s. The nickel keys indicate that it was one of Rudall Carte's cheaper models, and was very probably made outside their workshops (which at this period were entirely devoted to the Boehm flute) and bought in.
When it arrived the slide was fully closed, and in giving a quick initial check to the instrument, I extended the slide, which although stiff, was moveable.
As you can see from the photo... 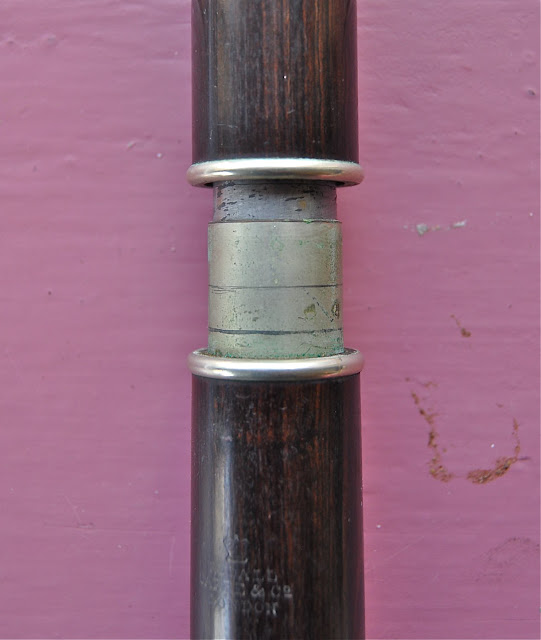 ...there are two lines crudely inscribed on the barrel liner.
The first thing that struck me was that in all probability, the previous owner ( see below) had made these marks as a guide to the pitches in which he or she most commonly played.
So here's a chance to illustrate my argument made in previous blogs, that a=440 was not a functional pitch for these flutes.
I removed the keys, ( the pads were burst and useless) and blocked the key holes. The head cork had dried and was loose and leaking, so that was also replaced.
When assembled, the flute, given that it probably hadn't been played in many many years, spoke easily with the full rich tone that one expects from a Rudall. I wanted to warm it up before checking the pitch, so I played it for a short while, then wiped the moisture from the bore, and began to check the pitch, using the Cleartune app on my iPhone.
As I suspected, but at the same time was relieved to find, the flute confirmed what I've been going on about in the last blog. The slide extension pictured above, is where the flute plays at a=440, when warm, to my embouchure.
I was interested to also check the two pitches indicated by the marks on the slide.
The upper one ( closest to the embouchure) gave a pitch of a=456, and the inner a=462, and finally, with the slide fully closed a=467, which is just marginally flat of G#. In other words, with a good tight embouchure and a warm day, this flute would be capable of being played in Eb!

I love to get old flutes like this in the post, knowing little about them until the case is opened, revealing something of their past history.
This one was in the original case, which was a bit shook, as they say, but all there. The flute gave the strong impression of an instrument that had simply been put back in the case one day, perhaps over one hundred years ago, and simply never taken out again. It obviously had been played to some extent, but not a great deal, I would have thought.
There are a few things that will indicate to the careful observer, the degree of use that a flute has undergone. On a very well used flute, there will often be wear on the edges of the finger holes, more marked on the side of the hole that the finger approaches from, i.e. on the side opposite from the player on the top three holes, and vice versa on the lower three. Sometimes, one can also see the marks of the finger nail on the surface of the flute, close to the hole, on the opposite side from the wear described above.
Another fair indicator is the condition of the maker's stamp. By necessity, the mounting and dismounting of the flute require the areas where these stamps are to be rubbed and handled, and on very well used instruments they can often be very faint and almost illegible. In this case, they were clear and precise, as you can see to some extent in the photo. Remember that the barrel stamp takes a lot of wear by necessity, as it's the only place you can grip the head to remove it.
The main stamp, including the address was even clearer.
This will be a great flute when restored...and there's almost nothing to be done. New thread joints, new pads, a good cleaning and a lick of oil. It should play wonderfully....but not at a=440.
Posted by Hammy at 14:05