The Cornelius Cabinet of Curiosity #4

One of the more delightful aspects of being a restorer, collector, and scholar of old flutes is the often peculiar way that items come to one's attention, and hopefully possession.

Every collector at some time comes across fragments which, fascinating as they might be, would be even more so if we could only see the complete instrument.

Crowley's music shop on MacCurtain St. was a Cork city institution for many, many years until it closed in 2013. From a traditional musician's, and indeed woodwind enthusiasts point of view, the story is enriched by the knowledge that the father of the owner was the renowned uilleann pipe maker Tadgh Crowley (1899-1952)

I got to know Mick Crowley in the early 1980s, initially I think, in connection with buying some African blackwood, and other timber that had survived from the old pipe making workshop, which had closed in 1966. Many of the pieces weren't suitable for flute making, but we struck up a relationship which lasted until his untimely death in 2010. Mick was a legend in Cork music circles, and you can read more about his shop and its famous customers here.

At sometime in the 80s, Mick showed me an old flute, which presumably had also come from the pipes workshop, and which would probably have ended up in the hands of a traditional player, were it not for a combination of it's unsuitability for trad music, and a scarcity of flute players in the Cork city of the time.

At that stage I was really only beginning my journey in the flute world, and all I could tell about the instrument was that it was a "frankenflute" made up of bits of different instruments. The body and the head, were that of Rudall & Rose #12...and before you all have heart attacks I have to tell you that it was an 1832 Boehm system, but of course a very early one of those as well.

The foot however is what I'm taking out of the Cabinet to show you today.

This is the front view, but you need to see it from the side to begin to appreciate what's going on here. 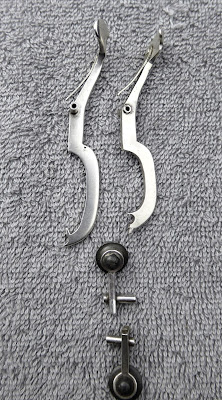 It's with this side view that you begin to really see how odd this mechanism really is.
For the moment lets set the Eb key to one side, which leaves us with something which is basically mechanically similar to all 19th century pre-Boehm simple system foot joints. Two touches for the right little finger operate interacting keys, which close open standing keys for C# and C. The interaction of the keys ensures that when the player wants to play C, then the C# remains closed. In order to facilitate this essential action the touch of the C key must somehow "get around" or bypass that of the C#. This can be achieved in several ways, usually by bending the C key around or over the C#, as in these examples - on the right, a Potter from the 1790s with the 'up and over' system, and on the left Rudall & Rose #1376, with the by then standard "around the side" method 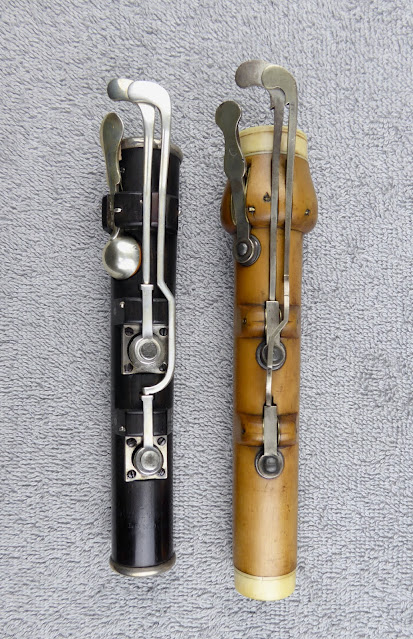 In the foot under consideration though, the C# and C touches run parallel until they engage with the open standing pewters, and this leads to some very interesting, if bizarre, design features. The parallel nature of the touches essentially means that the C# and C holes cannot be in line, as they normally are. The obvious solution to this would seem to be to move the holes slightly to the side...one one way, and one the other, but this is not possible. Why? Because the bore of the foot is small and the C and C# holes are large, in fact just about the same as the diameter of the bore, so that moving the holes in the same plane ( at right angles to the radius of the bore) would mean that the holes wouldn't meet the bore without a little step to one side or the other. That's flute maker's talk, but here's a diagram that will hopefully make all of that clear.
At A, you can see the walls of a hole that's almost the same diameter as the bore in the solid line, and then how a hole of the same diameter meets the bore, when the hole is shifted in a radial manner. ( the dotted lines )
At B, you can see how it's impossible to move the hole laterally and still line up with the bore. 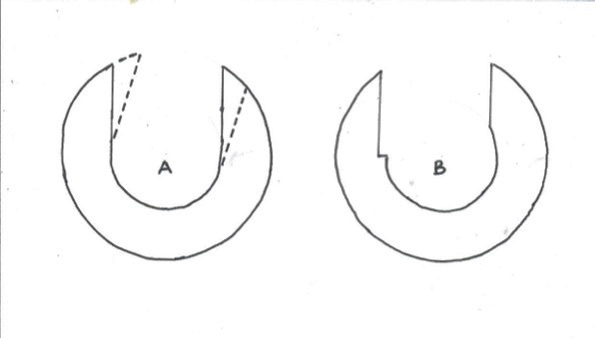 The solution in this case was to move the holes, not in a flat plane, but around the circumference of the bore, ( as at A ) meaning that they now meet the bore without distortion. The following images attempt to show this. 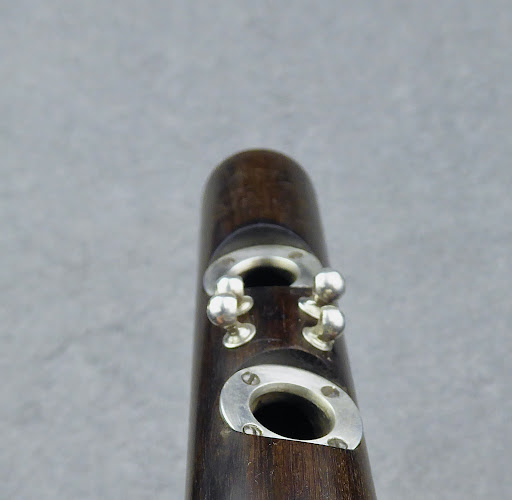 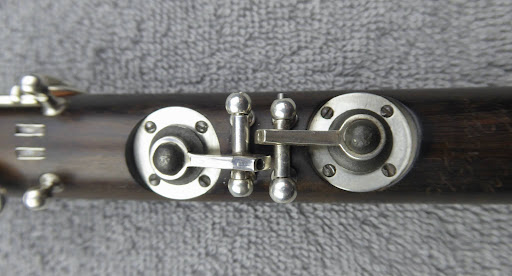 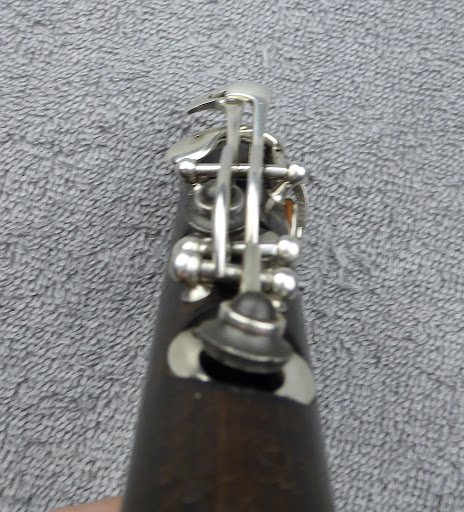 Fully assembled
This "twisting" of the mechanism is achieved by two means.
Firstly the linkage between the touches and the pewters, being simply of the "peg in hole" type allows the plane of action between the two to be as variable as required.
Secondly, and much more complexly, the circumferential movement of the holes requires that the axles of the pewters are tilted away from a central line, one in each direction, and this is achieved by having a tall and a short pillar holding each axle. I hope the following image illustrates this. 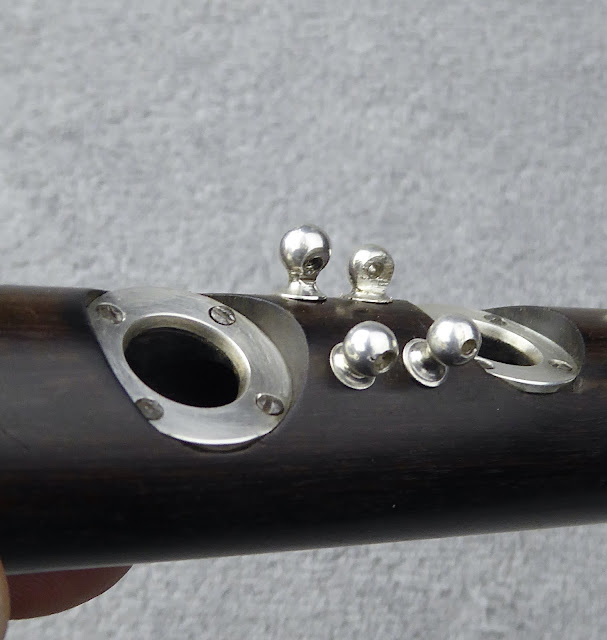 The condition of the foot as it came to me was not mechanically good. The key touches were somewhat bent, but the major issue was that the axle rods were corroded in place. I eventually managed to remove the keys but at the cost of destroying the axles, so the assembly you see in these photos was achieved with push rods that I drew down from silver wire. As a result, the mechanism doesn't really work as I write this, but I've no reason to believe, that in it's original state it wouldn't have worked as well as any standard simple system foot joint...and this is as good a juncture as any to point out that the key work on this foot gives absolutely no mechanical advantage over the normal simple system "in line" C# and C keys.
Time now to look at the Eb key which fairly obviously seems to have a separate origin, and prompts me to reveal, that though the body discussed above was clearly stamped Rudall and Rose, the foot was clearly stamped as this image shows,
T. Prowse
Hannway St.
London 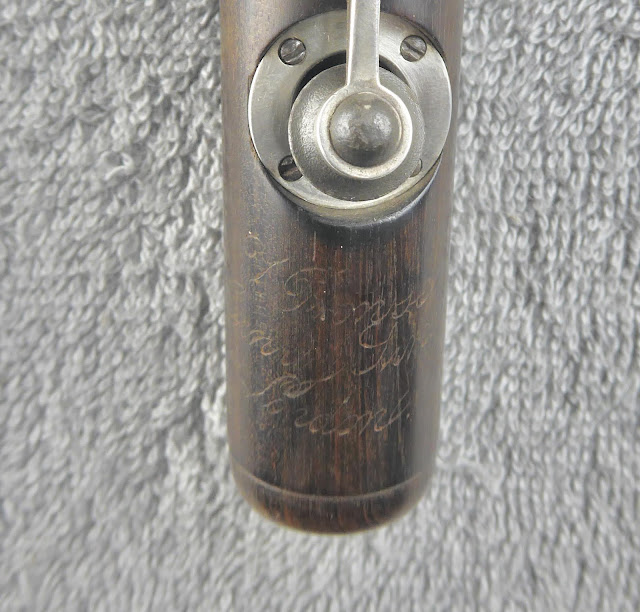 A close up of the key itself reveals several interesting features. 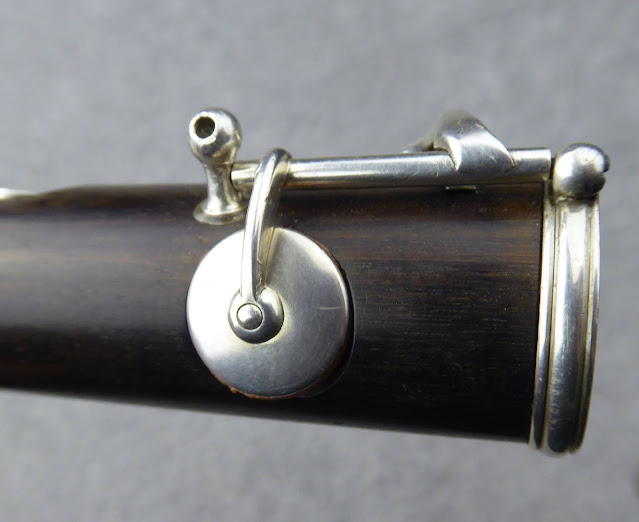 Remember that this foot was attached to a Rudall & Rose 1832 Boehm system, and here's the Eb key from one of those ( #18 in this case, which must have been made within weeks of #12 ) 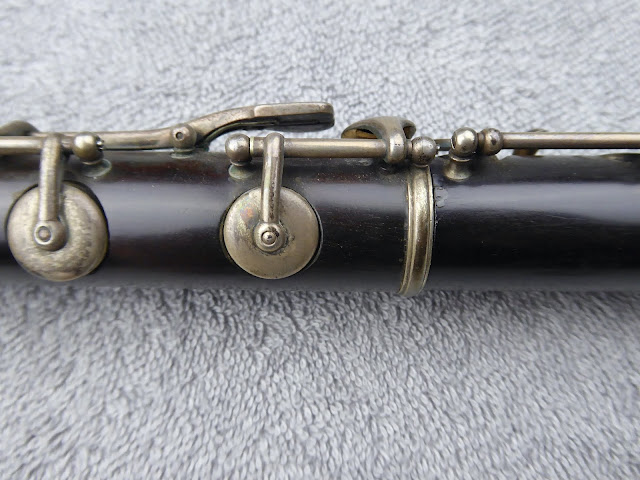 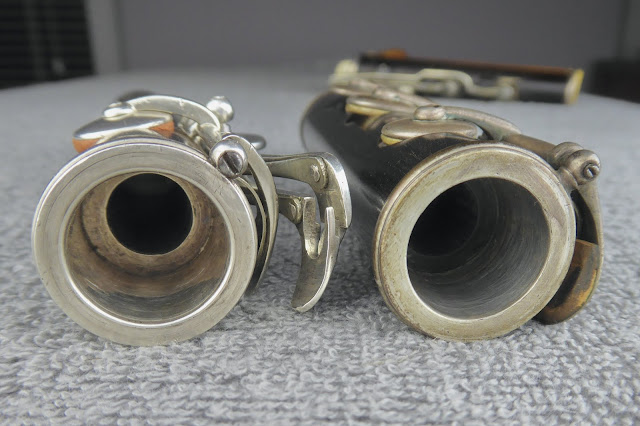 I've spent many years now looking at this foot joint, and the more I look the more mysterious and inexplicable it becomes.
Does the stamp give up any clues?
Prowse worked in London from 1816-1868, so this is certainly contemporaneous with the body.  So could it possibly be a repurposed Prowse footjoint? That initially seemed a likely explanation, but had to be rejected due to what was pointed out above about the circumferential position of the C# and C holes. Secondly, the Eb is on the wrong side of the flute for a standard simple system foot.
It seems obvious though that the Eb key has been repurposed. Looking at the photo above you can see how the lower end of the Eb axle doesn't have its own post, but uses the tall post of the C# pewter, where a hole has simply been drilled to take the end of the Eb axle.
So the foot is clearly not part of the original flute, or at least not all of it is. The element that might be part of the original flute, is the Eb key, or at least part of it, as the touch appears to have been modified.
There's also the possibility, given the stamp, that the Eb key could be from an 1832 Boehm system made by Prowse himself, which strongly resemble the R & R instruments, and in fact from what I can make out from the photo of a Prowse 1832 Boehm system in Robert Bigio's  "Rudall, Rose  & Carte-The Art of the Flute in Britain" (see Fig. 94, p. 91) this key may in fact resemble that of a Prowse 1832 Boehm system rather more than the R & R key pictured above.
Apart from the stamp, and the Eb key, there are certain other features which strongly implicate Prowse as the maker of this foot. Although the key work is very unusual, certain aspects of it replicate exactly Prowse's work as seen on other examples of his instruments...particularly the touches of the C and C# keys. Here they are on the mystery foot 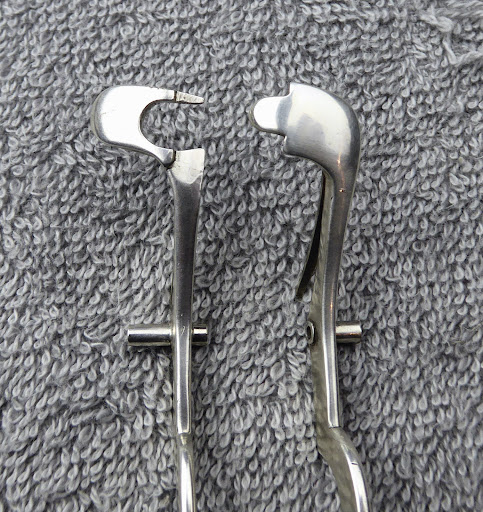 and with the linkage separated...
Here's the same thing on a Prowse Nicholson
Improved #3929 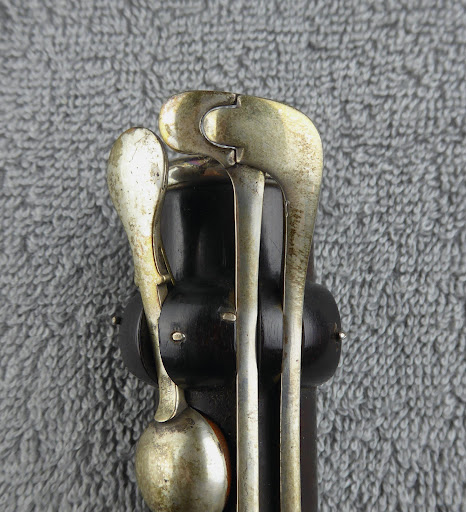 And then those same keys  dismantled 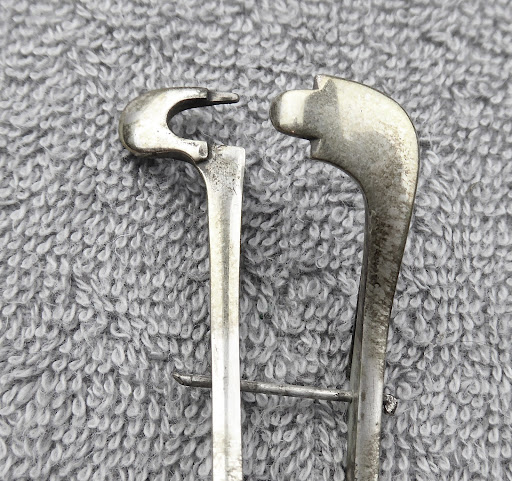 Compare how the interlinking of the C and C# touches compares on the two flutes, and I think you'll have to agree that they were made by the same hand. The way in which the C# touch (to the left) is shaped to fit under the C is absolutely characteristic of all the simple system flutes that I've seen by Thomas Prowse.
The Nicholson Prowse is to the left, and our foot joint to the right.

There is no evidence that the touches were soldered onto some already existing key work, so the only conclusion that I can realistically come to, is that this foot was made in the Prowse workshop, presumably to replace the original foot of Rudall & Rose #12.
But why would the owner of the flute choose to replace the original foot with something so unusual? Why not get R & R to simply make a new foot? The presence of what might be potentially the Eb key from a Prowse 1832 Boehm system, and the other elements of the keywork which strongly suggest the foot was made in the Prowse workshop still don't explain the extreme eccentricity of the construction.
It could be postulated that for some reason that the owner asked the Prowse shop to make a new foot, but then why repurpose an old key (the Eb), which I believe was not part of the original flute. And who designed the apparently unique system of operating the pewters, which as I've pointed out is of absolutely no mechanical advantage over the standard system.
I think the only conclusion to come to is that this was the flute of a wealthy amateur who had some sort of connection with the Prowse workshop.
How it ended up in Cork, in the workshop of a great uilleann pipe maker is a story that remains to be told.