The Cornelius Cabinet of Curioisties #1

This is the first of a short series of posts dealing with some of the more unusual things that I've come across in forty years of flute restoration.

This first example arrived in a group of flutes that I bought at auction in 2007. It was described as "a rosewood flute, unstamped with nine keys on wooden blocks".      So far so normal. (except, of course, it was cocus...a very common auction house error)

A nine keyed flute is really nothing unusual. Very many keyed flutes have an extra touch to one key...very commonly a key for R1 ( first finger, which opens the Bb key from below.) Also common is another key for R1 which operates a trill key, often seen on German "nach Meyer" type flutes.

But when this flute arrived, this what I saw... 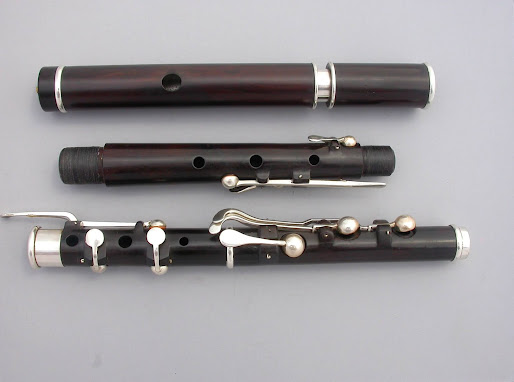 It took a moment or two to realise what I was looking at. The flute as you see it in the picture above is after restoration, but as soon as it was playable it didn't take long to figure out that the extra key didn't produce a note that existed in any known system of music, somewhere between F# and G. Otherwise it was a well made mid-19th century English flute, in fact a good bit better than average quality. It was a fine player, and I sold it sometime later, recouping costs to cover some of the other flutes bought at the same auction.
I puzzled over this key for some time, and the only function I can possibly see for it is to correct the notoriously flat F# that we find on many 8-keyed flutes.
Several other systems had been devised to do this.
This is a Tulou Système Perfectionné... 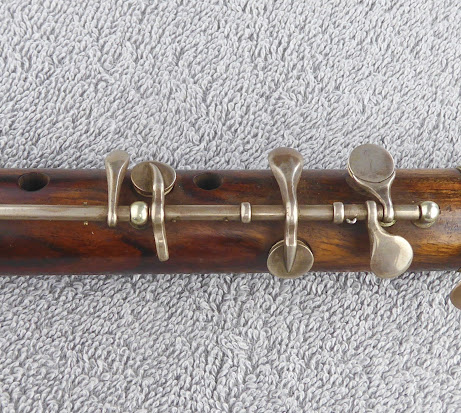 This might look a bit confusing at first. Hole number 6 is in this case covered with a plateau key, ( which is absent on most if not every other Tulou SP ). The touch under that opens the little key on the top of the flute just above the F# hole and is opened with R3 to correct the F#. This could be done on these small holed flutes by enlarging the F#, but the French ( and German ) predilection for small evenly sized holes ruled this out.
In fact this, although operating on exactly the same principle, is different to the more common set up...

This illustration is from Tulou's Methode, and you can see that the key is a long one on a cross tube mount, like a reversed long F but is still operated by R3.
Various other flutes have used a similar device.
To finish here's a neat example from a Hudson Pratten #185 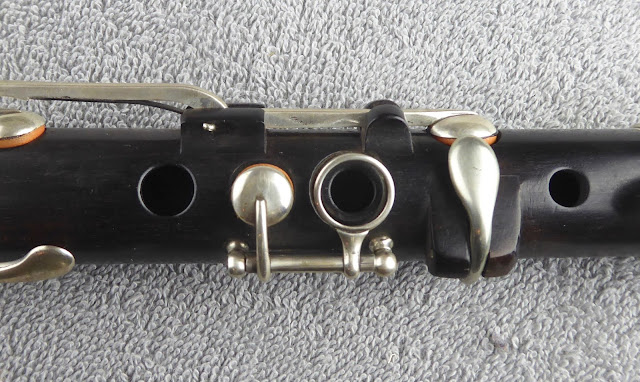 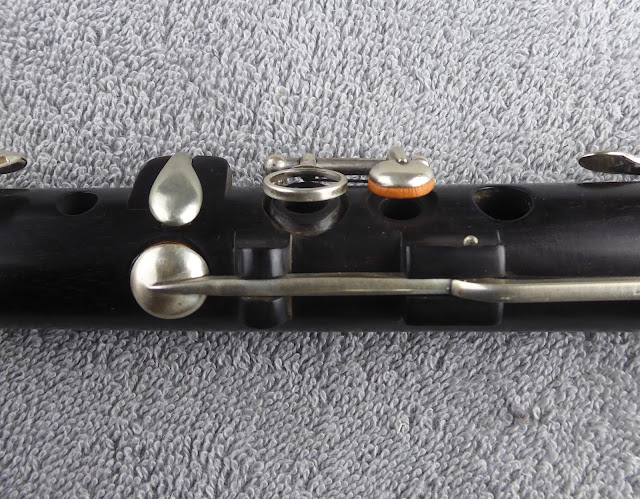 You'll note that with this system, the ring key controls the key which sharpens the F# automatically, and with the Tulou, the same key is operated by a finger, R3 which is available without compromising other fingerings.
From this point of view, the 9th key on the first flute seems very counter-intuitive.
Was it meant to correct the F#, ( which it didn't, or at least very
badly ) or is there a possibility that it was to vent some other note?
I'd welcome input from anyone who might be able to shed light on this.