The Cornelius Cabinet of Curiosity #2

The flute making firm, founded by the flute teacher George Rudall in 1821, to provide flutes for his pupils, quickly established a reputation as the finest of the London makers, which they maintained well into the 20th century.

Initially, in 1820 he had flutes made by Willis, who was among the finest makers in early 19thC. London, and were stamped George Rudall, and usually but not consistently "Willis Fecit" ( Latin for Willis made it, for those who didn't go to school in the 60s) on the foot.

By 1821 he formed an association with the Edinburgh maker John Mitchell Rose, and the first registered address is 11 Tavistock St. where they stayed till 1824. They worked at various addresses in the Covent Garden area, and after moving to possibly their most famous address, 15 Piazza, Covent Garden, they returned to 1 Tavistock St. in 1838.

How George Rudall and John Mitchell Rose came to establish the firm together is not known. Rose was from Edinburgh, Rudall a Londoner, and Rose, although several flutes exist apparently made by him, was far from being an established maker at the time. I strongly recommend the account of the Rose flutes in Robert Bigio's excellent tome "Rudall, Rose & Carte - The Art of the Flute in Britain"

Although the vast majority of the 8 keyed flutes that Rudall & Rose, and later Rudall, Rose & Carte would make were of a very standard design, one which they were instrumental in establishing, they were also noted for very many flutes which broke that mould. Basically, it seems, they would make anything that a customer was prepared to pay for, and this has resulted in some very unusual flutes. I've come across several of them in my time, a few of which I mean to feature in the Cabinet of Curiosity series. This is the first of those.

This particular instrument was brought to my attention by a friend, who although he didn't own the flute was able to organise the photos which I've used in this blog. They were quickly taken and not intended for this purpose, unfortunately not showing some of the detail that I'd like to see, but will serve for the moment.

So first things first. The flute has small holes and is in cocus and silver, and has a standard early 19th century 8 keyed block mounted set up. The low C and C# keys are entirely missing. The blocks are lined in silver. It appears to be in rather good original condition, apart from those missing keys, with no cracks or other damage that can be seen in the photographs. The stamp is worn, but I'm told ( I haven't actually examined this flute myself) that apart from Rudall and Rose,  the address  is Tavistock St., and the figure 1 is somewhere in the #, that there isn't much else to be gleaned...well possibly something, although unlikely,  that we'll see later.
So what"s unusual about it?
Well it has no tuning slide, not unusual, in itself since I've seen several other R & Rs with this feature. The outstanding Irish player Catherine McEvoy has played for many years a Rudall & Rose with no tuning slide. I'm inclined to believe though, that these slideless heads were normally provided as an additional head along with a normal head with a slide. I'm basing this on a couple of originally cased R & Rs that I've seen with two such heads and the fact that similar examples can be found among the work of the other major makers of the period. 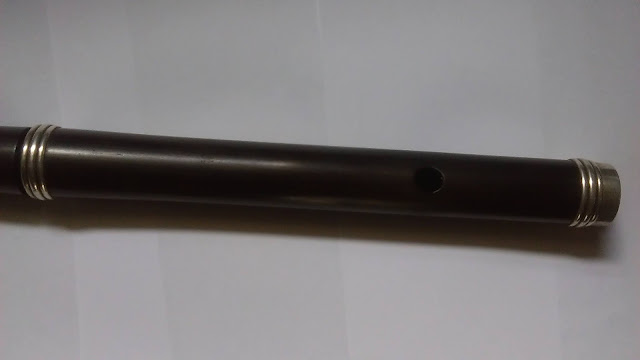 Secondly, you'll note that all the keys are pewter plugs, in the manner of Potter Patent flutes from around the turn of the18th century. Again I'm told that some other examples of this exist, if very rare. 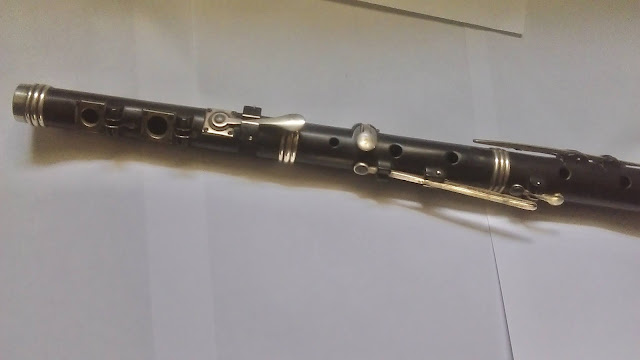 Thirdly, the mounts. The sheathed head cap and end of foot are commonly seen, but although double rings are a feature of many American 19th C. flutes, I have  never seen triple ones as on this flute.
Finally, that long F key. 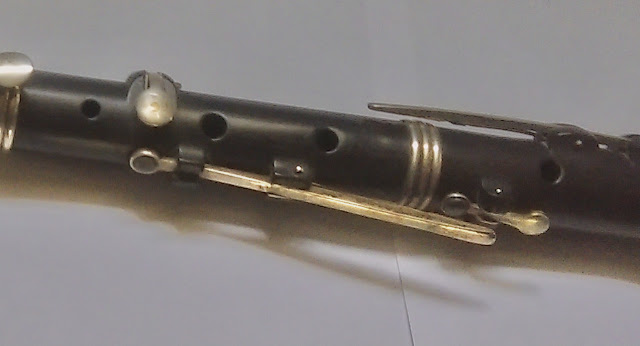 From its general style and profile it has to be original, but of all the unusual features of this flute, this takes the biscuit. I think this is possibly the only example (although no doubt others more knowledgeable will rush to correct me) of a long F which doesn't have a kink or bend just above the axle block. The point of this feature is, of course to ensure the long F and long C don't hit and bend each other when the flute is taken apart. I wonder in this case if the angle of the straight key still allows this to happen?
So can we date this flute, from the information available? The general style, to me suggests earlier rather than later, so what can the address tell us. Rudall & Rose worked from two addresses in this street, no. 11 in 1821 (their first address), and no. 1 from 1838 - 47. On the basis of the scanty evidence I have at the moment, I'm edging towards 11 as being the more likely.
However, in the verbal report I had of the flute which led to the photos, the person who saw the flute said he read the address as 7 Tavistock St.
Now very likely this is a misreading of 1 Tavistock St. A random little mark on the left side of the top of a 1, could easily look very like a 7.
Who lived at 7, Tavistock St.?
George Rudall...and two at least of the very earliest known numbered instruments  (ref Bigio as above) from Rudall & Rose bear this address, could this be another?