Last Friday brought a TG4 TV crew to the workshop, filming for a program called Deanta in Eireann (Made in Ireland) which is not just about flutes, or even just about music, but about all sorts of things made in the country. Given the state of the place at the moment, there is a movement to try to help matters by supporting local industry.
I was interviewed by Manchán Magan, and the talk got around to something that surprised him a lot....the fact that a lot of the traditional flutes available in Irish music shops are from Pakistan and India! So we discussed the economics of handmade versus mass produced instruments. Be interesting to see how it comes out. Not sure when it will be shown, but watch this space.
Which reminds me, that since we're on the topic, the program, featuring yours truly as a low whistle maker, in the Ceird an Cheoil series, made about four years ago, was re-shown recently.
You can still get it on the TG4 player
NB the funky lighting in the workshop, produced with the aid of a smoke machine, no less!
Coladh sámh agaibh....
Posted by Hammy at 14:02 1 comment:

Funny how things get onto the back burner. Had quite a few things that I wanted to blog about in the last week, but more mundane things got in the way as usual. But anyway...
First of all a bit of a rant induced by a thread over on Chiff and Fipple, about a rather nice flute by Wylde which was for sale on eBay. The discussion got around to what pitch it would likely play at, which is, of course always an issue with 19th century English flutes that people want to play at modern pitch. It wasn't long before various "sounding lengths" were being quoted as if this was in some way a definitive measure of the pitch the flute would play at.
When oh when will people realise that the pitch any flute plays at is not simply a function of the physical flute itself, in terms of sounding length, but is a combination of player and flute. Any number of different players will elicit any number of different pitches from the same flute with the slide at the same position. It largely depends on embouchure. This is one of the main reasons for the invention of the tuning slide ( and before that the corps de rechange system). It allows different flute/player combinations to play at the same pitch on the same instrument ( and in different atmospheric conditions!) I wouldn't mind, but a lot of the people waving the banner of "the sounding length determines the pitch" are experienced enough to know better.
And while I'm on a roll here, I also have to say that I think I can blow a flute as good as the next man ( or woman) and the vast majority of classic English simple system flutes that I've seen and played, will sound way higher than 440, with the slide in any reasonable position ( which is what, I hear you cry, but I'll get back to that another day). One can certainly play these flutes at modern pitch, but the tone and response is only a pale shadow of what it is when played around 10-15 hz higher.
So would a maker intend an instrument to play at a pitch which masked the tone and response of which it was capable?
I (partially) rest my case, Watson.

The new keys are sort on the back burner for the moment, or at least for a few days this week. Have to make some money, and make sure the waiting list doesn't get out of hand.
I should have said that the idea with the new keys is a sort of a compromise between casting and fabrication, so I'm planning to cast the key shanks, but press the cups with a die, and then join the two.
I'm trying to figure out a way to give me an option here, of either soldering them on, or attaching them with some sort of thread or screw à la Hudson....which latter I find a very attractive style of keywork.
But, for the moment, I have to finish a set of whistles, and organise delivery of two six keyed flutes which I finished recently. Then there's a couple of used keyless to be finished and sent to their new owners, one local, and one which will end up in Chile.
Amazing how the traditional Irish flute is a global instrument now. I think I've sold flutes in over 20 countries ( must check and get a correct figure) including recently to Mexico and Ukraine! 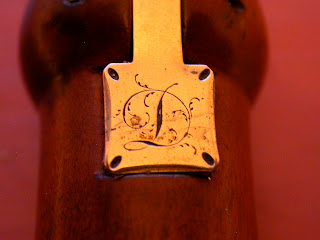 Well, here I am, nearly 25 years after first getting an E-mail address, finally dipping my toe into the world of blogging. To be honest, I'm not sure what the point of this really is, but hopefully I'll find out as I go along, and it'll end up as a blockbuster with a cast of thousands (of clichés)...or else peter out miserably.
Readers should note that the photo on my profile is not exactly current ( think less hair [ok, even less hair]) but it was the only one I could find that had anything even remotely resembling the ghost of a smile.
I'll be hoping to post more recent pics of me (and the workshop, and some of my activities therein) but for now, given the fact that I look at least three weeks dead on any passport or photo ID image that's ever been taken...it'll have to do yis!
That's all for now.
Hammy
Posted by Hammy at 12:00 No comments: