Look anywhere on the internet these days, and you'll find the term "Irish Flute" being thrown about like snuff at a wake. If you enter it as a search term on eBay, for example, it will produce very many results varying from flutes made from the late 18th c., to those made last week, all over the world.
How did this come about? How did what are in effect a very disparate group of instruments become categorised under the same sobriquet?
To cut a long story very short, and most of you probably know the basic story, the type of flute that Irish traditional players always preferred was the pre-Boehm eight-keyed flute that was widely played all over Europe from the early 19th c., until the late19th/ early 20th c. In terms of players in Ireland, this continued to be the case up to the mid 1970s, when due to a combination of a great expansion of interest in Irish traditional music, and a severe lack of old flutes to meet that need, new instruments based on the old 19th century ones began to be produced, initially in Ireland, but soon in other countries where the Irish diaspora had led to a core interest in Irish traditional music.
The early flutes of this type were copies, of varying degrees of exactness, of the 19th century originals, but by the mid to late 1980s, the makers of these instruments were beginning to change the design to better suit the music being played. I believe, although it's hard to be sure about these things, that I proposed in the 1st ed. of my book " The Irish Flute Players' Handbook", published in 1990, that these instruments should be called Irish flutes, in what was the first use of the term in that sense.
However...
What about flutes from the earlier period, classical, pre-Boehm flutes that actually happened to be made in Ireland?
Such indeed do exist,  but it's important to remember that these flutes had, almost in their entirety, no connection with traditional music in Ireland as we know it, especially at the time they were made.
Or had they?
Let's go back to something I hinted at in my last post...the acquisition of yet another flute.
When I was beginning to make flutes in the mid 1970s, one of my first reference points was uilleann pipe making. Here were a group of people using basically the same techniques that I wanted to learn, and what's more had a history which coincided with the type of old flute that I was trying to replicate. And so I began to become familiar with the history of the uilleann pipes and their makers.
For many years, I was unaware that there was any relationship between flute and pipe making, but at some stage, possibly in the 90s I saw an F flute for sale, on the website of the American traditional music business Lark in the Morning, which was stamped "Coyne Dublin". If true, this could only have been the work of the celebrated uilleann pipe making Coyne family.
Then around 2005, when I was readying the second edition of the Handbook, I became aware of, and was able to include a photograph of, a second Coyne flute, this time a fife.
Then recently another flute by Coyne this time a concert pitch instrument came on the market, which I was able to acquire, and which became the inspiration for this post.
I had been aware, that outside the apparently extremely few flutes made by pipemakers ( and at this stage only those by Coyne were known) there were flutes made in Ireland which were obviously intended for the mainstream classical market, and although some of them, particularly those by Butler, were in the hands of traditional players, they were obviously not made with that intent.
Although I had been aware of some of the Irish makers, (Dollard merited a cameo in the Handbook)  my initial involvement with old flutes was not really conscious collecting, but as I was restoring a lot of them, particularly in the early days before the "Irish flute" took off, I gradually accumulated quite a few, and among those was a flute by Ellard, which was the first Irish-made flute that I actually possessed. I didn't think much about it except to note it's similarity to some of the London flutes that I was familiar with. This is it... 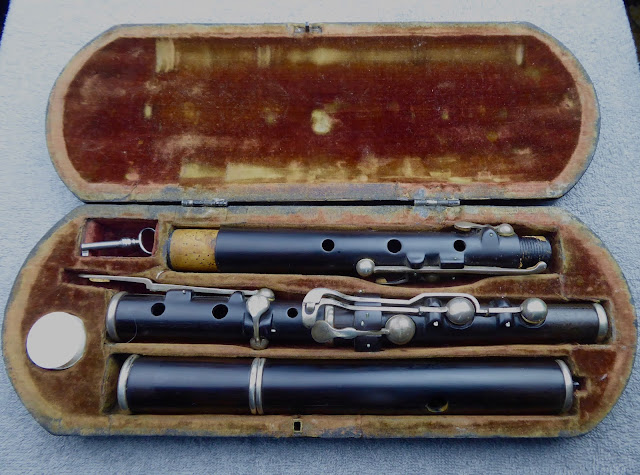 Then last year,  a flute by Dollard came up on eBay, and I managed to get hold of it. This one really put the cat among the pigeons, and via a discussion on The Flute History Channel the essential question that I'm trying to address here was raised; Were these flutes which are stamped Dublin after the makers name, really made in Dublin, or were they, in common with many London made flutes, bought in from the actual makers, and for maker read dealer.

The reason this Dollard flute brought this question to the fore, is that it has an unusual system of keys on the foot joint...

That stirred something in my memory of having seen something like that before, and several colleagues on FHC quickly identified the flute as identical to those stamped "Drouet London". In an interesting twist to the story, it turns out that here we have another example of the dealer/maker conundrum, in that it's agreed that these Drouet flutes were made by Ward, and so it's highly probable that my Dollard was as well.
Then the Coyne flute became available, and when it did, led to an interesting discussion on FHC, with Simon Waters raising the possibility that this flute, even though, clearly stamped Coyne Dublin, apparently with the same stamp that he used on his pipes, looked remarkably similar to flutes made by Goulding. (and of course Goulding had a Dublin connection, of which more later.)
It's a very different instrument to the two previous flutes...although ostensibly from the same period. 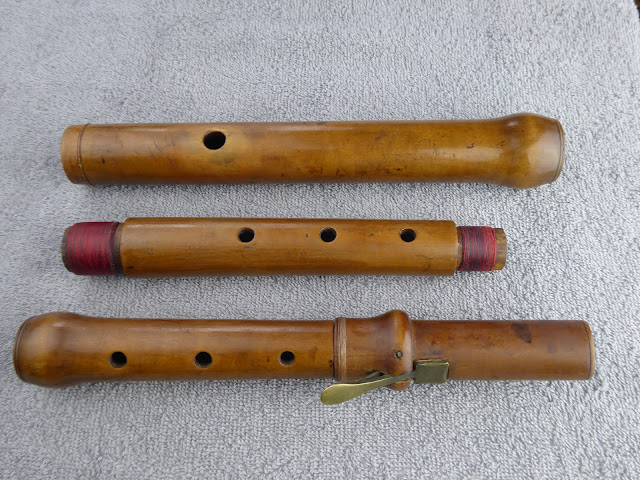 Here's the maker's stamp, faint I'm afraid as they seem to be on a lot of his instruments. 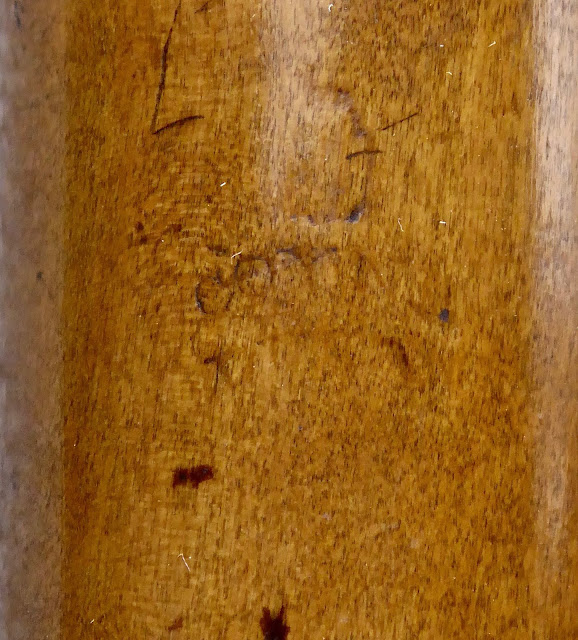 And here's the same stamp on drones from a set of Coyne pipes... 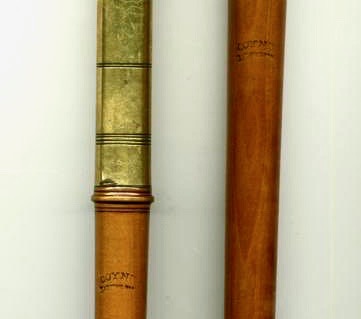 This led me then, to try and make some sense of the whole Dublin-made flute story, and given that at the moment I can't go to Dublin to further this research, I've found the Dublin Music Trade website to be extremely useful, certainly at this basic stage of the research.
Trying to find a pattern in all of this is difficult. There seems to be no consistency between the different flutes that we know of that purport to come from Dublin makers...there is no Dublin style of flute.

But one thing that is emerging is that there were two groups making  flutes in Dublin; I think we have, at this stage to accept the term maker to include dealer/retailer...as has often been pointed out, George Rudall never made a flute.
Both groups are roughly contemporaneous, beginning in the latter part of the 18th c. and running through to the late 19th.
The first group are general wind instrument makers, who include flutes in their repertoire of instruments.
The second are essentially makers of what we now see as traditional instruments, i.e. uilleann pipes, who also offered flutes as part of their repertoire.
What was the relationship, if any between these two groups, and what is in essence a third group in the background...the London makers. This what I hope to tease out in the course of my next few posts.
Posted by Hammy at 12:07