It has often been said that Rudall & Rose would make any sort of flute if asked. I've seen a few examples of this in the past, notably a flute which without looking closely at the maker's stamp, even an experienced eye would put down immediately as a French, mid 19th century six keyed flute, with all the profile, and typical exquisite post mounted keys.
On closer examination you'll find the stamp Rudall & Rose, which interestingly is upside down on one of the joints.
I had this flute in my possession for a while, and took the trouble to measure it, revealing the bore to be typical of French manufacture, so it was not simply a Rudall in French clothing.
In cases like this though, there is also a strong possibility that R & R might have contacted one or other of the good French makers of the period, ordered a flute "sans marque" and then applied their own stamp to it once it crossed the channel.
A couple of months ago, I came across a flute in an auction, and since it seemed interesting, bid on it.
The picture provided by the auction house seemed to show a standard, four brass flap keyed, boxwood and ivory flute, which most flute aficionados would date as early 19th century, probably no later than 1810, possibly turn of the century, but the description claimed that the maker was Rudall, Rose, Carte & Co. 20 Charing Cross, which would put the date between 1854-71.
An online bid was successful, and the flute duly arrived, to be photographed, after re-padding the keys, re-threading the joints, and a very light cleaning which was all that was required. Otherwise in almost mint condition, with no cracks to the wood or ivory mounts.
Here it is: 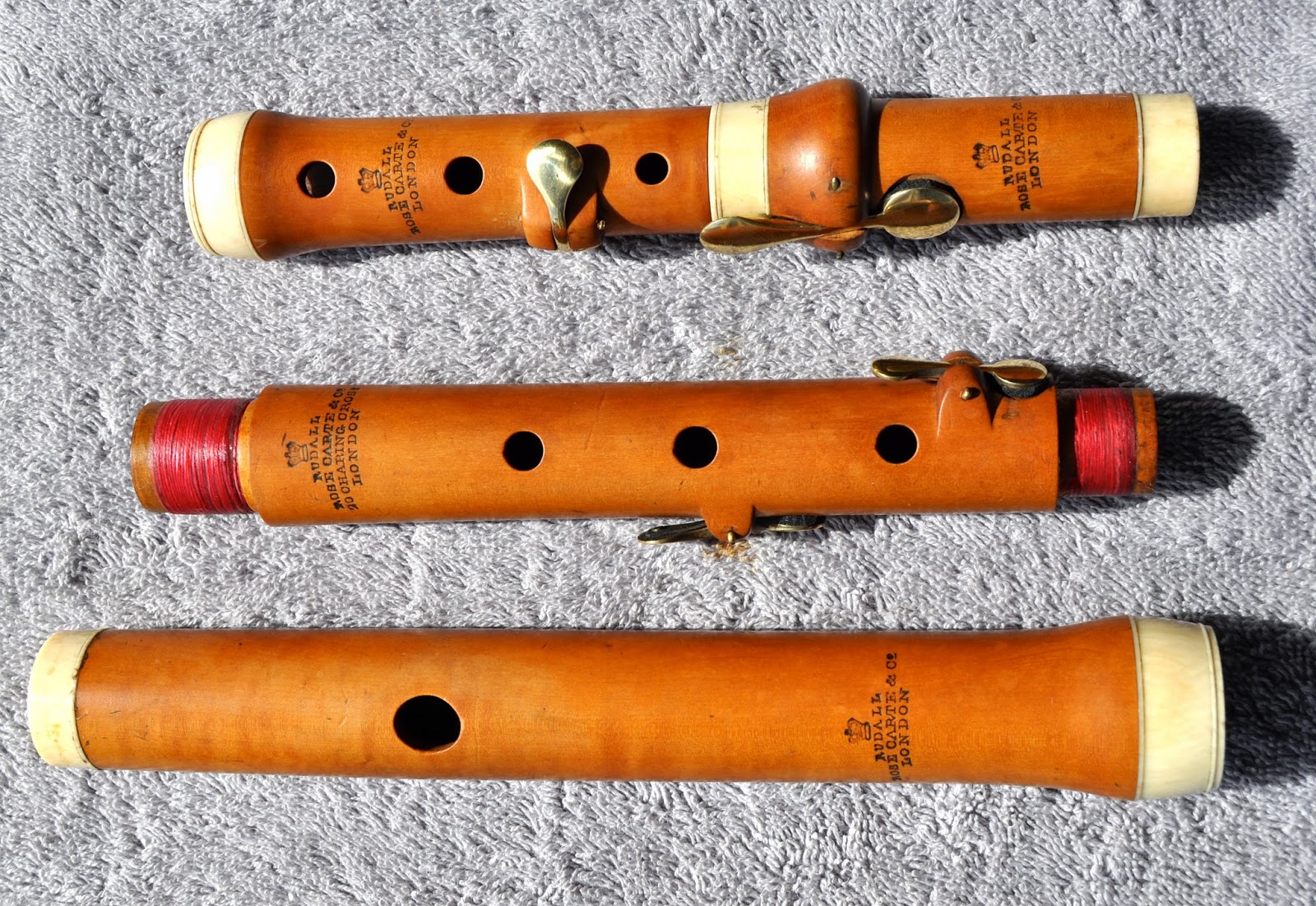 I have to admit that I can't immediately see the reasoning behind this instrument. There is always the possibility that it's a fake, but why would someone fake a totally anachronistic instrument? Being so totally uncharacteristic for a flute of the period indicated by the stamp, we can only go on the stamp itself, and I'll have to compare it with another typical Rudall, Rose & Carte that I have to be absolutely sure, but it looks kosher to me.
One would also think that this has to be a unique instrument, perhaps ordered by an eccentric customer, but in the course of the restoration I noted typical marks, in this case a "V" on each joint and on the keys, that seem to indicate that it was part of a group of similar flutes.
Is there a possibility that the original owner wanted to experiment with early music using authentic instruments? A slim one, surely given that even today originals are fairly readily available, and must have several fold more so at the time this was made. It also seems to pre-date the early music movement by almost a half century.
A mystery, compounded by the fact that when I finally got to play a few notes on it, I discovered that it's badly, unplayably, out of tune. An unfinished instrument perhaps? Unlikely, since any corrections to the tuning would have been done long before the flute would have been finished to this stage. Or maybe not.
A few years ago, I bought, and sold on, a flute by Dan Godfrey Sons. When I got it, it was in mint condition, as typified by the crisp stamps, showing very little, if any, handling as a playing instrument.
The finger holes were tiny, much smaller than would be expected on a flute of the period, and again the tuning was abysmal. I enlarged the finger holes to typical sizes for such a flute, and produced an Eb flute which played rather well. I can't believe that this flute was sold to a player as a finished instrument, but rather had been ordered as I got it, perhaps for a keen amateur to finish to their own satisfaction?
I welcome any suggestions from readers on this flute.