Progress on both fronts, restoration, and provenance of the McKenna flute.
When it first arrived, and in fact even before that from the photos that I had of it, one idea I had was that this might well be a composite instrument, with ivory head a later edition.
Closer examination soon disabused me of that idea. The mounts on the head matched those on the rest of the flute. The diameter of the head was unlike that of the "German" flutes that I had thought might be it's source. The embouchure, although now distorted by the crack also appeared different to those of the German flutes.
In response to my appeal on this blog, several people got in contact with useful leads, most notably American maker Jon Cornia, and Italian afficionado Francesco Collissimo.
Jon had alerted Francesco, via Facebook,  to the work of the American maker Asa Hopkins, and his apprentice and successor Camp, and produced these photos of their work. 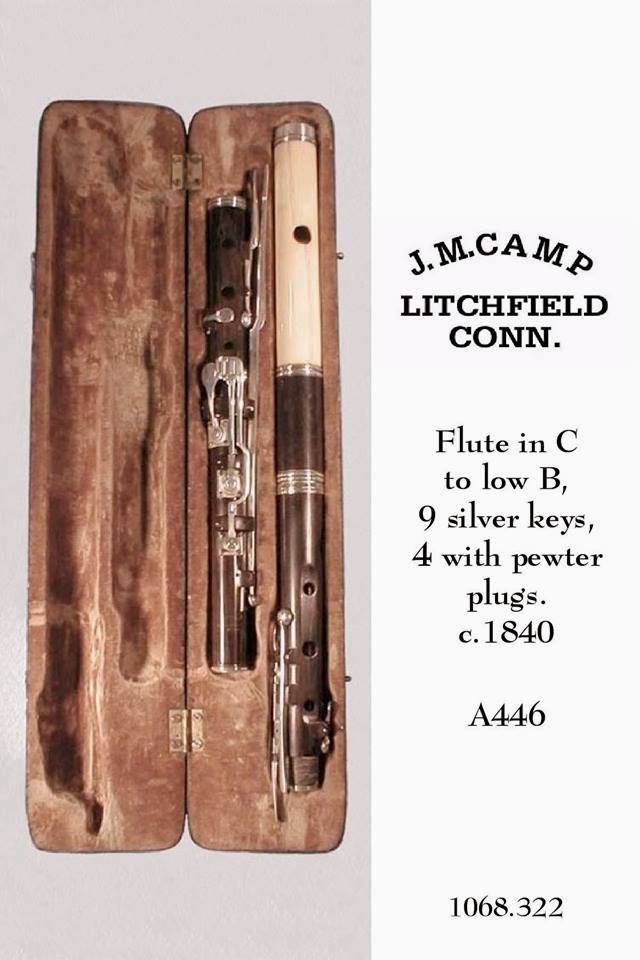 The similarities between the instrument to the left and the McKenna flute are remarkable.
The mounts, the silver sheathing of the head cap, the pewter plug on the Eb key, and the general lines and style of the keys and block work all point in the direction of a flute from this workshop.


Also this image of a flute by Hopkins, confirms the general impression.

This flute again points to the Hopkins/Camp workshop with the shape of the key touches on the short F and low C and C# identical to the McKenna flute.
Again note the similarity of the squarish blockwork.


Although of course it is impossible to state definitively that the McKenna flute is a flute from this workshop, at the moment it's certainly the best guess, and I have a gut feeling that it's correct.
I'd like to see one of the original Camp/Hopkins flutes in my hands though before I'd be absolutely sure.

From c1810 a successful clock-maker, developing water-powered machines for mass production methods, using interchangeable parts; 1829 established WWI workshop at a locality neat Litchfield, building a dam and factory on the Naugatuck river, which 1830-75 became known as 'Fluteville', where large quantities of flute, clarinet, later fife, flageolet were produced; 1832 in partnership with J.M Camp; 1837 retirement of Hopkins; 1837-39 Camp proprietor, now as Camp and Hopkins; 1839-67 Firth & Hall proprietors; bought by J.A. Hall. 1955 Fluteville village was raised by flood and subsequent Government requisition of the area for a flood control project.


The mystery remains, if it is a flute from this source, why did it remain unstamped?